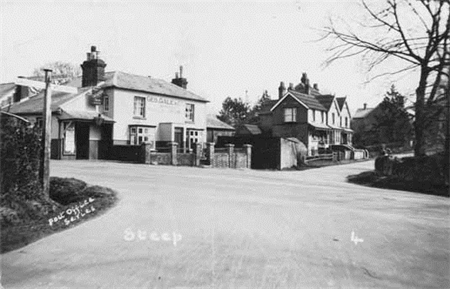 Some of the following is conjecture based on historical knowledge of Steep and some facts.

Why is the Cricketers Inn called by that name, when Steep cricket club and grounds are at the opposite end or our village? The answer lies in the fact that Steep Cricket Club was not founded until 1893, but The Cricketers Inn dates from several decades before then.

A young man named Henry Ifould was perhaps the young entrepreneur of his day. He was born around 1825 into a humble Steep family. Yet rather than becoming an agricultural labourer, like his father Richard, Henry developed an interest in brewing. By the age of 26 years, he was living in the Spain in Petersfield and listed as a working maltster.

At that time, the Hawker family of Ashford Lodge were a notable presence in Steep, owning much of the land that lay on the north side of what we now know as Church Road. At this point, Church Road Steep was not a road at all, but only existed as a track across the common land known as Church Common or ‘The Commons’.  This common land is not what we now know as our present Steep Common, opposite the church, but instead was the land at the western end of the Church Road track, lying between the present Mill Lane and Stoner Hill Road.

It is said that the diaries of William Hawker recount that cricket matches were organised on the family estate at Ashford in Steep, with teams of married farmers against single ones. But where could much needed refreshments be provided after the match?

By 1859 Henry Ifould had built a new public house named The Cricketers Inn at the crossroads. This may well have happened with encouragement from the Hawker family. The driveway to the Hawker estate lay just a few yards north of the Cricketers pub.  Upper Ashford Lodge in Stoner Hill Road was the lodge house at the top the drive, leading to the bigger house in Ashford Lane. The Hawkers would later go on to provide land for the building of Almshouses, Steep School and cottages. They instigated other items in the village, why not the pub too?

Henry Ifould applied for a licence stating that the pub offered good accommodation with eight rooms, stabling for six horses, a chaise house and it occupied a central position. A testimonial was submitted to the magistrates, signed by both churchwardens and respectable inhabitants of the parish who raised no objection. Mr Minty, a local solicitor, supported his application. A licence was duly granted in September 1859. It seems likely that Henry may have either borrowed money to erect this substantial building, or a monied family like the Hawkers provided funds, in order to make greater provision for the local sporting events of the time.

In various historical records, the pub is listed as The Cricketers, The Cricketer’s Inn, The Cricketers’ Inn and The Cricketers’ Arms. 1858 and 1859 copies of White’s  Directory of 1858 list Henry Ifould as Keeper of a shop and beerhouse, so he may have had a primitive premises on the site before the erection of the pub in 1859.  So it may well have been that the founding of the pub was to serve the needs of those to came to visit the Hawker’s Ashford Lodge estate in order to take part in the country pursuits offered there. Cricket matches were played too, so these may well have given rise to the name of the pub.

Henry Ifould is  listed as ‘an Inn Keeper on Church Common’ in 1861 Census.

Henry Ifould’s business as innkeeper prospered. At the 1866 Enclosures of Steep, he was able to buy for £40 the land on which the Cricketers stood. Kelly’s Post Office Directory of Hampshire for 1867 placed Henry Ifould at the Cricketers’ Inn on the Common.

Our entrepreneur died in 1869 at the age of only 43. His young widow Esther may have attempted to continue with the pub on her own.

Former blacksmith Alfred Pocock has taken over as licensee early in 1871.

Newspaper reports again mention cricket being played in Steep, this time on the occasion of a harvest home in October 1873. Alfred Pocock, Cricketers licensee, was running the beer tent at this occasion, when James Ifould was accused of stealing money. There is an account of this, in the article on James Ifould here https://historyofsteep.co.uk/portfolio/james-edward-ifould-ifold-born-about-1846-steep/

A list of subsequent licensees and a little more history follows.

Alfred Pocock was described as  “Innkeepee & shopkeeper” in a Trade Directory. He then left, possibly around 1878 – 9.

Edwin John Longhurst  was described as “Publican & Grocer” at Cricketers Inn.  He was still there for the 1891 census.  The Register of Licences 1892 – 1894 confirms he was still there between those dates too.

The licence went to George Wakeford in June 1896 and stayed with him until 1906.

There is a village tale, yet to be confirmed,  of a possible fire at the Cricketers in 1930s, after which it was rebuilt. Old photographs show The Cricketers to have been a very different building from the present one.

Reg Canterbury was the much liked publican of the Cricketers

More to be added in due course

Find My Past- Census records

The Reputed Manor of Ashford by William Whiteman