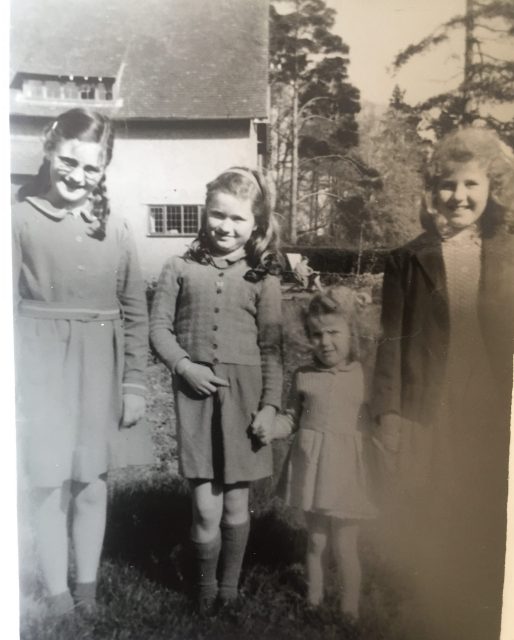 I was born in Derby but moved to Steep in 1943 at the age of six when Dad (Bill Slater) took a position at Bedales.  I lived with my family at Foxcote, a house in Church Road near the Bedales entrance. First we lived at the east end of the house with the Jarman family in the adjoining house next door. When they moved out, my family moved to the west end. Mum was then responsible for an overflow of six boys from Bedales, who lived in the east end of Foxcote.   Bedales had started to grow after the war.  When I was there, there were only 200 pupils.

At Bedales there was a dairy farm which was a going concern , with 24 head of dairy cattle , two cart horses, pigs and hens.  The six Bedales houses named Barnfield Cottages (now 90-100 Church Road) were not built then and that field was part of the farm with a huge hayrick that we played in!  The cattle were mostly in the huge field that ran from Bedales drive, south of Foxcote and all the way along to the Petersfield road.  I spent many hours on the farm, learned to milk the cows and clean the barns and horses.  Two local labourers were employed plus the farmer and his family.  During the war we got fresh milk and cream for butter from the farm, making butter by shaking cream in a tin! The farm was disbanded in the late 50’s I think, it was still viable in 1954 as I worked in the Bursar’s office at Bedales for a year before going to nursing in London, and was responsible for their payroll.

Yes, I went to Steep school and have fond memories, and knew the Ifoulds, the Dodds, the Kings and the Vollers, who lived two doors from Foxcote.  I was friends with Rosamund Voller; her father kept Chichillas and Mink.  They moved to Sheet and Rosamund married a farmer and lives somewhere in East Sussex.   As a teenager I used to babysit in the village for the Bennett, the Gillingham and the Walesby families.

On Saturday nights there was square dancing in the village hall. During the week there was a library there.

In the 1940s opposite the Cricketers was the old forge. It later became a garage and is now a bicycle shop, I used to love watching the horses being shod. It was a thriving business then as the only car in the village belonged to Colonel Crump and horses were used on all the farms, plus for hunting.

My mother (Fanny Slater) was very interested in keeping the old footpaths open, for as farming became more mechanized, fields used to be cultivated over the old rights of way.  She used to walk the paths regularly: The old Stoner road, along to Lythe Hanger and Stroud and the other way along the old lanes behind the village school to the Shoulder of Mutton, Wheatham and Kettlebrook. As an aside, I used to like playing in the old Mill ponds, where watercress grew and lots of tadpoles!

By 1950s the shop was still functioning but cars were beginning to take over, so it was easier to access Petersfield.

Anne’s sister, Elizabeth Briemberg (née Slater), has also recorded her memories in this section of the website.

If you have memories of Steep in the past we are always pleased to hear from you. Please email through the ‘Contact Us’ section of the website. Fran Box