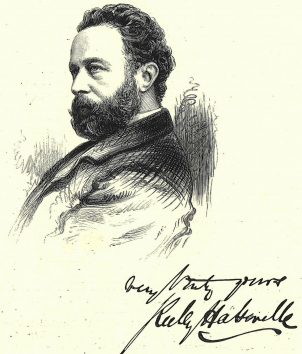 John Keeley Halswelle was born on 23rd April 1832 in Richmond, Surrey. He was the son of David and Elizabeth Haswell. He began his artistic career by contributing to the Illustrated London News at an early age. He then went on to book illustration which took him to Edinburgh. There he found a friend in publisher William Nelson whose books he illustrated. He had a painting exhibited at the Royal Scottish Academy in 1857, to which he was elected associate in 1865. He travelled to Italy from 1869 and painted figurative subjects inspired by his travels. Some accounts state that he had a studio in Rome for a time. From the 1880s he changed to painting landscapes. In 1882, he showed a painting entitled: ‘Three Counties from Whetham Hill, Petersfield’ and was elected to the Royal Institute of Painters in Water Colours in the same year.

An account in the Pall Mall Gazette of 14th April 1891 tells of Kelley Halswelle’s artistic somewhat nomadic life on the River Thames. Keeley Halswelle had a houseboat on the Thames. In 1871 he initially seems have converted an old Oxford barge which lasted for about a year. He then had a houseboat built by Messrs Sam Saunders of Goring at a cost of £300. She was named The Kelpie and was about 14 tons. Through the main entrance on the bows were three steps down. On one side was the wine cellar and on the other the storeroom. The saloon measured about 15 by 12 feet and had a small open fireplace, the flue of which warmed the bedroom. On the other side of the bedroom was a pantry and a spare room to the kitchen and beyond that an area used by Halswelle as a luxurious wet weather studio. The windows had blinds of copper gauge wire to keep out insects such as mosquitoes. Plenty of fishing and swimming was done. There were no taxes, water rates or gas rates so existence on this houseboat was ‘a pleasure’. A day’s journey downstream was perhaps 23 miles or upstream 15 miles. Halswelle wrote a book of his experiences entitled ‘Six years on a Houseboat’. A number of paintings of scenes on the Thames were accomplished. These were shown at an exhibition in London 1884, also named ‘Six years on a Houseboat’.

Halswelle had paintings accepted for exhibition at The Royal Academy in the 1870s and 1880s, also in other London galleries. His landscapes often featured water.

Keeley Halswelle was married three times. In 1852 he married Mary Jane Blackwood Gilbert clandestinely. A few months later, due to her infidelity, he separated from her and later divorced in 1859. In Edinburgh in 1861, he married Maria Browne, the daughter of advocate James Browne and Isabella Stewart. She died in 1873 and in the same year he married Helen Gordon (sometimes referred to as Helena). She was the daughter of Major General Nathaniel John Gordon of the 31st Madras Light Infantry and his wife Mary, née Hedley. The couple lived at first at 75 Welbeck Street, Marylebone, where their elder son Gordon was born on 8th July 1874.

Keeley Halswelle was living in London in 1880 when he placed an advertisement in The Hampshire Telegraph of 3rd April 1880 stating:

An account by J. Ashby-Sterry in the Bystander column of the Graphic newspaper of 25th April 1891 nostalgically describes Friday evenings in former years at the rooms of Keeley Halswelle at 4 Albermarle Street:

“His special friends would always find him at home after eight. You climbed up a very high staircase and were sure to find a hearty welcome and some notable people when you got there. There was plenty of talk, there were pictures to be seen, there was lots of smoke and grog. On a side table there was a huge joint of cold beef and pickles and tankards of ale. Very merry these evenings were, for our good friend was the best of hosts. I remember once stopping very late, and passing a very enjoyable time in going through the whole of the accomplished painter’s Thames sketches, and listening to the stories connected with them. As I was well acquainted with the original spots, this inspection was of the deepest interest to me. Probably no painter has taken so many pictures of the Thomas as Keeley Halswelle or carried them out more conscientiously.”

The Victoria County History of Hampshire Vol 3 states that Stoner House was built by Keeley Halswelle. Other sources say that Halswelle purchased Stoner House for £3,300 in 1880 and thus came to live for periods in Steep.

Stoner House and Lodge had been designed by the prominent architect R. W.Edis (1839-1927), who also designed additions to Sandringham. Occupants living at Stoner House in 2020 report that Edis built the house for himself in 1870 and that this information came from a descendant of the Halswelle family. Edis was employed in Steep to oversee the alterations and improvements that were made to the church in 1875-6. In Kelly’s Directory of 1870-9, Edis is listed as a resident of both Steep and of Fitzroy Square, London.  It may well have been that Halswelle purchased Stoner House from Edis following his newspaper advertisement. A Western Daily Press account of 21st August 1908 states that Halswelle altered the house to create one large room capable of holding his curios and possessions. This may have been the creation of his studio.

The Halswelle’s younger son, Wyndham, was born in Mayfair on 31st May 1882. Helen’s parents, Major General Nathaniel and Mary Gordon had meanwhile come to live at Stoner Lodge. The Major General died aged 79 years in 1883 and Mary his wife died in 1886 aged 70 years. They were both buried at Steep churchyard.

While at Stoner House, Keeley Halswelle was a Ruling Councillor of the local habitation of the Primrose League, a national organisation that had been set up in 1883 to promote Conservative party principles. It was so called because the primrose was said to be the favourite flower of Benjamin Disraeli.

Only the coachman and gardener and their families were present at Stoner House for the 1891 Census on 5th April that year.

Keeley Halswelle died of pneumonia aged 58 years in Paris on 11th April 1891. His sudden death had not been expected. He had just returned from a two month yachting tour of Egypt, Tukey and Greece with Sir John Pender. His wife Helen had gone to join him in Paris. His body was returned for burial at Steep, but the funeral was a quiet affair. Helen was also ill and had to remain in Paris, so no invitations could be issued. Instead, it was arranged for a saloon car for mourners to be attached to the 11.15am train from Waterloo. Carriages were to meet them at Petersfield station and take them to the church. The return train left Petersfield at 3.39pm. Keeley Halswelle was buried on 20th April 1891 in the grave of his parents in law (Major General Nathaniel and Mary Gordon) at Steep churchyard. The local Habitation of the Primrose League sent a massive wreath of primroses. The chief mourners at the funeral were fellow artists Sir James Linton R.I., Mr Poingdestie R.I., Mr Whumperis R.I., as well as Colonel Coleridge Grove, Colonel Dalton, Sir John Pender, Mr J.L. Toole and Mr R.H.S. Wyndham. Many other friends sent wreaths.

Many of Keeley Halswelle’s oil paintings of the Thames are still in existence today and can be found in exhibitions or they come up in auctions. ‘The River Thames at Maidenhead’ by Keeley Halswelle belonged to Henry Tate and was part of his gift to the nation for the Tate Britain gallery. More paintings by Halswelle can be viewed on the Art UK website here: https://artuk.org/discover/artworks/search/actor:halswelle-keeley-18321891/page/2#

Both Halswelle sons went into the army. Gordon Halswelle born 1874 saw service in the Second Boer War and in WWI. By 1916 he had reached the rank of Captain in the 1st Life Guards. He also served with the 13th Hussars and the 2nd Dragoons The Royal Scots Greys. Scratched into the lead of one of the windows at No. 3 Stoner House is the following inscription:

The battle of Colenso in Natal on 15th Dec 1899 was a major defeat for the British in the Second Boer War. Internet sources state British casualties to have been: 143 killed, 755 wounded, 240 missing. Of the Boer forces there were 8 killed and 30 wounded. It is not known whether Halswelle took part in the battle. It seems that he felt the need to record the terrible loss of life and injury incurred.

Helen retained Stoner House but does not always seem to have been there.

At the 1901 census 45 year old William Black, an East India merchant, and his family were living there. Around 1907-8 Montague Kirkwood and his wife were living at Stoner House. He was also a Ruling Councillor of the Primrose League. In July 1907 Kirkwood held the summer fete of the local Primrose League at Stoner House. Nearly 500 people attended. By September 1908 the Kirkwoods had plans to leave and go abroad.

Helen Halswelle was present at Stoner House for the 1911 census. Her son Wyndham was visiting her on census day.

Wyndham Halswelle went into the Highland Light Infantry. He became a Captain and Company Commander. He was killed in WWI at Neuve Chapelle on 31st March 1915, being shot by a sniper. His name is on Steep’s war memorial. His story as an Olympic athlete is recorded on the Steep History website too: https://historyofsteep.co.uk/portfolio/wyndham-halswelle/

Helen seems to have left Stoner House at some time after 1911. She lived until the age of 90 years, dying in Devon in 1936. Her son Gordon had married and had a son but Gordon had died aged 61 years in London in 1935. In the late 1990s a great grandson was located.

The widowed Laura, Lady Airedale, and her daughter had come to live at Stoner House by 1914. Lady Airedale had married the First Baron Airedale: Sir James Kitson, a Liberal politician in 1881. He had died in 1911. Lady Airedale was at Stoner House until her death in 1939 and participated in social and charitable activities in Steep and the locality. Aged 39 years, her daughter, the Honourable Olive Kitson married 40 year old Major Harold Kingsley at Steep church in October 1926. The reception took place at Stoner House. The Kingsleys lived locally, possibly at Stoner House, until at least 1951. They were PCC members at Steep church. They both supported youth organisations such as the Scouts and Petersfield football.

In 1988 Stoner House was converted to three dwellings. A year or two later three additional houses were built in the grounds. There are now six houses on the seven acre site.

The 2020 Residents of Stoner House report that the gardens once had fine topiary and water on different levels. The gardens are on the Hampshire Gardens Trust list, recorded as a late C19 small park, but no research has yet discovered their details.

Book: Buildings, Gardens and Monuments in Steep by Struthers, Box, Routh and Storey 2018

Registers of All Saints’ church, Steep

Grave lists for churchyard of All Saint’s church Steep

Information provided by James and Antonia Lawday of Stoner House 2020