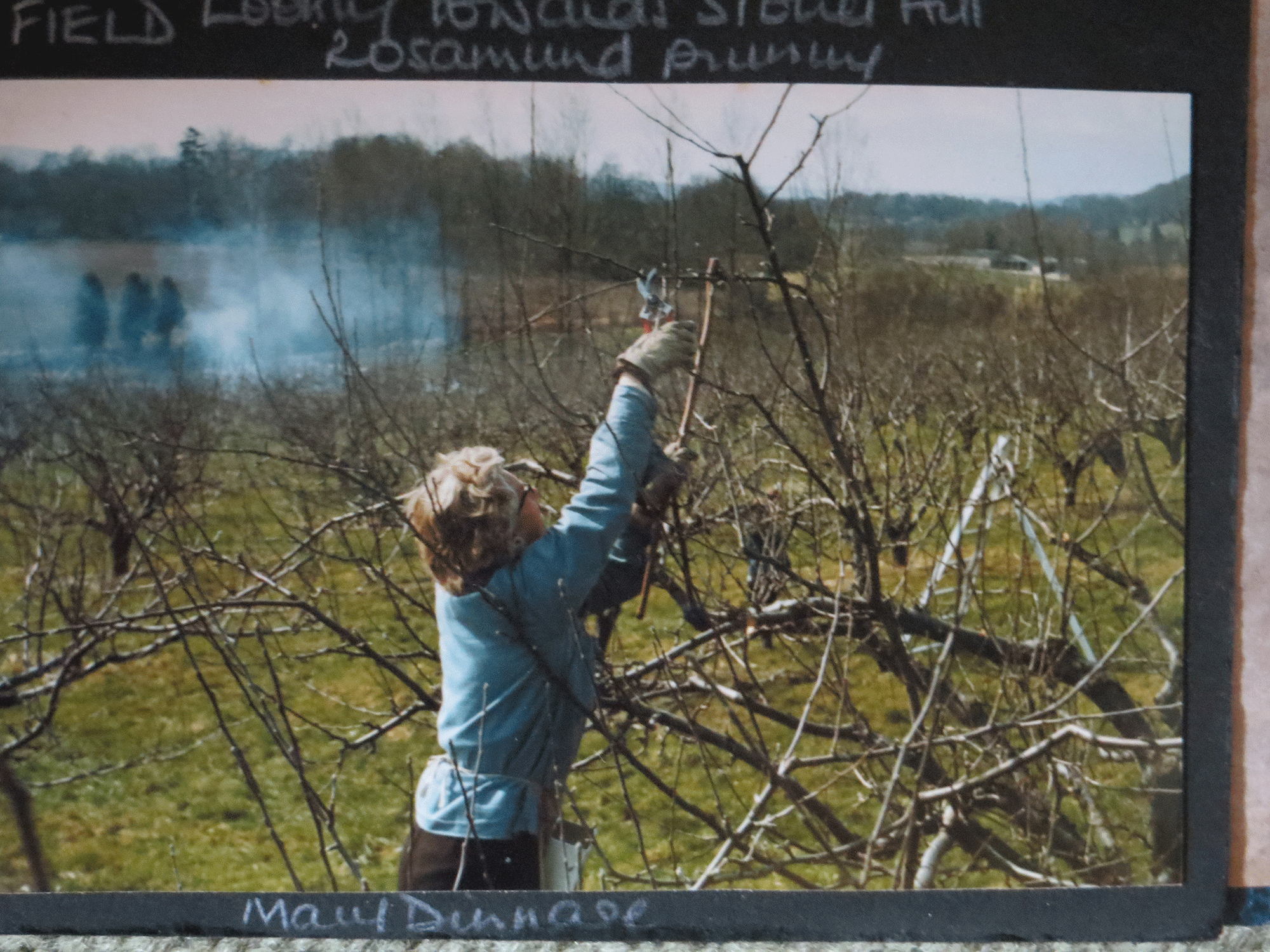 Fond Memories from Caroline Glover, Jean Lance and Rosie Pocock. These are extracts from accounts that first appeared in the Steep and Stroud Newsletter

In the spring of 1966, having viewed an unattractive house in Tilmore, we went up a road which we had not driven before, the C18, in order to eat our picnic lunch.  We parked in a lay-by on Stoner Hill.  What a view!  The far valley was full of apple blossom, the hangers were in good health, not neglected as they are now, the fields were small and delineated by hedges. We were bewitched, we returned halfway down the hill to look at a cottage by which drooped; a broken For Sale sign.   The cottage was damp, smelled of mildew and was surrounded by undergrowth.  We bought the house and lived there for 31 happy years!

I soon became involved with the work of the Apple orchards.

David and Didi Archer had come here, bought or rented fields at Little Langleys from the Spencer-Churchill’s and also owned fields on the north side of the valley. This a perfect site for orchards as the fields are on greensand and the gentle slope prevents any deadly frost pockets forming when the blossom is out. These orchards produced the most wonderful Cox’s Orange Pippins, Lord Lambourne’s, Egremont Russets, a few Superb’s, many Bramley’s Seedlings, and Conference and Comice pears. The farm also supported a large local labour force.

Should an air frost be forecast fires would be lit in the fields to keep the air moving.  In spring when the bullfinches played havoc eating the flower buds balloons were flown above the orchards hoping the marauding birds would think raptors were in the air.  Never the less the trees nearest the boundary hedges were always very short of fruit.  Nowadays we are overrun with kites and buzzards and there would be no need of balloons, and very few bullfinches!

I was recruited into the work force by a very great friend though neither of us was qualified for David’s “Naval Wives Club” as he referred to us all!  Many of the ladies were just that – Naval wives.

Work was available all year round; the season started with apple picking in late July, pickers put into gangs to work in different fields by the efficient forewoman, Wynn Woods.  We picked into canvas-bottomed barrels which hung around our necks.  We climbed 8 or 10 foot tripod ladders to reach fruit in the middle of the trees and learnt the technique of picking without leaving bruising fingermarks.  The apples went into small boxes or to gigantic bins which went into storage for winter use.  This was hard work and we earned 3/2 (about 16 pence) an hour. (At that time my entire housekeeping money including for cigarettes for us both was £5 a week!)

From the fields the apples went to a huge packing, sorting and cold storage shed, set against the Little Langleys orchards above the “Pig Farm”.  Here a workforce of women would sort and grade the fruit as it came off a conveyor belt. And the fruit was sold here, especially big presentation boxes at Christmas time. Didi Archer also made hundreds of jars of apple chutney for sale in the shop. The large wooden bins were kept under refrigeration either here or elsewhere, before being made ready for sale in late winter: carbon dioxide would circulate in the sheds to preserve them.

Some of us formed a smaller loyal band who spent the winter, come frost or snow, pruning the trees. It shocks people when I say that about a third of the tree was removed each year, boughs were sawn by the boys using power from the tractors, smaller branches we sawed with a curved pruning saw or lopped with long-armed loppers, the small stuff was snipped by Felco secateurs ( I have mine to this day).  A pruning knife for removing canker completed the armoury, which we each carried around with us.    Those who didn’t like standing at the top of a tall ladder picked up all the cut wood which was then cleared by fork lift tractors and then burnt.

An even smaller band of workers would attend to the grafting.  Cox, in particular, are not self fertile and require a pollinator.  These slips would be grafted by one method or another into the tree.  I remember one year large Bramley trees were cut to about three feet and we then crown grafted four slips to form a young tree. One old Colonel came to help with the pruning one year: he was dismissed after repeatedly “pruning” the grafts out of the tree!

The Archers built the appropriately named Butts which was designated the farmhouse and was built in a wonderful position in the valley – when the farm was sold the farmhouse designation was transferred to one of the farm cottages at the junction of Mill Lane and Ashford Lane.  Halfway down the drive was a manually operated petrol pump where Wynn would give us our allowance.

Sometimes on cold winter days, as we huddled over our picnic lunches Didi would come with a cauldron of tripe and onions, and very good it was, too!  Didi could not watch us as we pruned – each time we snipped or thinned a spur she would say “There goes another murdered pound of apples”!

We pruners had an agreement that, if ever anyone fell off a ladder and required attendance of an ambulance we would undress them and discard all the old clothes which we had piled on – sweaters with holes in them, cast off long-johns, seaboot stockings and lumps of sheepswool gathered from fences which we stuffed into our Wellingtons!  Fortunately this did not occur!

We worked the daylight hours, but could miss a day or so if other duties called such as Meals on Wheels (which then came from Bedales and we delivered to about ten Steep and Stroud residents)

Stalwarts in the working force that I remember were Meg Chidlaw- Roberts, Midge Boyall, Pippa Williams, Rosamund Evetts, Debbie East (Jocelyn Hooton’s mother), Helen Robb. Mary, Ruth, Jacky and Mrs Angell (who looked immaculate whatever she was doing).  Ros had a very basic VW Dormobile with two benches down the sides, in bitter weather we would crowd inside for our “lunch” (elevenses).

Our perks were good too, we could pick up windfalls or bird-pecked fruit to take home, and in winter could take the heavy prunings before they were burnt.  I had a £40 Morris Oxford bought from Crash Repairs by the station. It only fired on three cylinders, but could just stagger to the valley and back with a load of applewood, after two years we gave it to a technical college!

The lanes were very narrow then, and there was a width restriction on them. One well known and well bred Lady was driving along and came bonnet to bonnet with one of the tractors.  She was renowned for her bad driving, and NEVER would reverse.  She stopped, switched off her engine and, so the story goes, the tractor driver moved her aside with the fork lift!  It made a good tale and is believable.

I do not recall when it was that the Archers were tempted by a Common Market bribe, to grub up your orchard and get £3000 an acre.  From then French Golden delicious flooded in to Britain, but nothing can compare to a Cox.  The farmhouse designation was transferred and the house sold separately from the farm.  The sight of huge bonfires burning all those wonderful trees was sadness itself. The passing of an era.

The whole valley came under a farmer with big ideas and very wide machinery, the narrow lanes became wider, the banks eroded, hedges between the fields removed, and old field names disappeared.  I hear one big field referred to as Banana field!  It used to have cosy names, Home field, Well field. “Banana Field”, I despair!

Didi and David only had daughters and they have all left the area, David and Didi retired to France but, sadly, were dogged by real bad luck.  They were a lovely couple, and played a huge part in village life.

Ros and I kept up our skills; we pruned orchards at Rothercombe Farm, at the Red House and at Aldersnapp and in Hawkley for several years.  We then did a bit of interior decorating which was not so rugged but only half as much fun!

Sadly my memory can add very little to the account that is already in the newsletter.  David and Didi Archer originally lived in Wheatham Hill House, before building The Butts, and I also have a very vague notion that before planting the Apple Orchards they used to grow strawberries in those Orchard fields. Veronica Marston, possibly, and perhaps David Sykes would remember far better than me about the history of the land.  Strangely enough, as children, we seldom ventured past the water fall unless on a hearty family walk, with map and parents present.    I do remember being invited to a large children’s party at Wheatham Hill House when the Archer’s were in situ and the correspondent in the newsletter is quite correct, the Archers were famed for their kindness, fun and generosity. Re the picking; I remember the organised ‘gangs’, each with a leader, the tripod ladders and the canvas-bottomed barrels plus the shame of letting an apple slip through the fingers and fall to the ground, quite often bumping off the ladder as it fell.  This was a cardinal sin! I think we ate our break time sandwiches along the line of small (as they were then) popular trees and, yes, the assumption was that the poplars had been planted as windbreaks. I too remember riding through the dormant orchards. A family of ‘Gammons’ lived at Bushey Hill (Park?), a large house at the top of Bushey Hill, approached by a long drive from the bottom of BH;  it lies set back and hidden but is almost opposite  the lay-by that housed the apple shed. Rosie and Angie Gammon (the 2 daughters) ran a small but very successful riding stables which was at the end of a little lane that led onto the old A3, in Steep Marsh; now swallowed up by the by-pass possibly?

I was very interested to read the recent article on Ashford fruit farm and the nearby stables, and the follow-up piece in the newsletter. I am the Rosie Gammon mentioned in the latter piece and I have been asked to add to the story.

My family moved to Bushy Hill in 1946. The property had been left empty during the war years, with only Jack Oakley, the gardener, to keep an eye on the place, and the first thing that struck us was the lack of any birdsong, and very little wildlife except for the odd rabbit and badger. Strange; it makes one think birds like some sort of human company, for the birds soon came back.

The apple orchards were very beautiful in spring with the blossom and yes, the pickers became a sort of club, all very friendly. When in the seventies the government encouraged the grubbing up of orchards and David Archer turned the ground into grassland, my husband Beric bought some of the smaller fruit trees and these we have still.