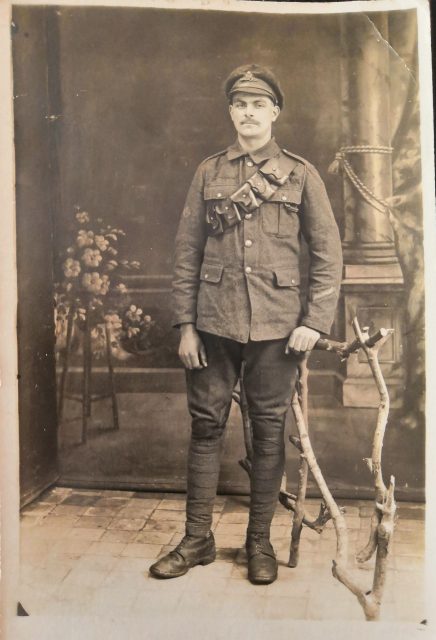 Charles Cottingham’s name is significant in that it is listed on the Steep War memorial and read aloud each Remembrance Sunday.

A few months after the outbreak of WWI, Charles left his gardening job in Steep and enlisted at Southampton in the Royal Garrison Artillery. By June 1916, he had arrived in France and by early September of the following year, he was appointed Acting Bombardier. A few days later, his unit was in position at the ‘Moated Grange’ in the Neuve Chapelle sector. A bomb was dropped by an enemy aircraft on their position. Charles received multiple wounds to his back, arms and legs. Two other comrades were wounded and another killed. Charles was taken to No. 11 Casualty Clearing Station. He died a few days later on 14th September 1917 aged 24 years. Charles was buried at Godeswaerwelde British cemetery, France.

There is more about Charles and the Cottingham family here:

Remembrance: The Names of those from Steep who Died

Steep at the end of WWII