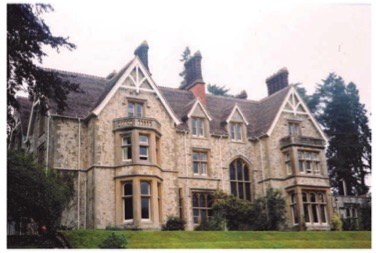 The house named as Coldhayes in Steep Marsh was built in 1869 for Revd George Horsley Palmer, brother of the First Earl of Selborne. By the onset of WWI the house had passed to Augusta Hannay, widow of Ormelie Hannay, the adopted son of the Horsley Palmers. Perhaps because of the family military background, Augusta Hannay offered Coldhayes for use as a Red Cross auxiliary hospital for returning wounded troops at the start of WWI. It opened in December 1914 with twenty one beds for non-commissioned officers and other ranks. Lady Kelly, the wife of Lt Gen. Sir William Kelly of Bushey Hill, Steep, organised volunteers from Steep, Froxfield, Langrish to help there as VAD nurses.

By Christmas 1914 there were ten English and ten Belgian soldiers recovering at Coldhayes. By January 1915 there were forty patients. Football matches were arranged between patients and locals, outings by car were organised for them. Patients also took part in a theatrical production, a concert, and a recital. Fetes and fundraising activities took place. Annie Oakley, maternal grandmother of Claire and Nisa, of the Harrow Inn, Steep worked as a ward maid at Coldhayes for most of WWI.

Coldhayes was the longest serving auxiliary hospital in the Petersfield area, only closing in December 1918, by which time it had cared for 614 patients. Mrs Hannay was given a commemorative certificate, signed by Winston Churchill, to acknowledge the work done there. It still remains in the house today. Mrs Hannay continued to live in the house until it was sold to the Blacker family in 1939. Coldhayes is now a Grade II* Listed Building and remains a family home.

Information above from the book: ‘Hospitals of the Petersfield Union 1914 – 1919’ by local author Bill Gosney, available at Petersfield Museum.

The images are courtesy of the Harrow Collection

For more information about the house Coldhayes, its architecture, gardens and former inhabitants, please see the book: ‘Buildings, Gardens and Monuments in Steep. available through this website.

Steep at the end of WWII