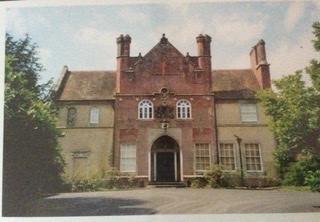 The house has the date 1882 on the north face. It was built for Lt. Col. Charles Ughtred Shuttleworth and his wife Rose Isabella. He had been wounded in the Crimean War. Charles Ughtred died before the house was completed. His widow Rose Isabella, with her elder son Algernon, twins Charles and Philip and daughter Mary occupied the house during the 1880s and 1890s. The family gave the west stained glass window to Steep church in memory of Rose’s brother Capt Preston. Rose was a family name in her family. The window bears several rose motifs. The Shuttleworth family ancestry can be traced back to 1388. Their ancestral home was Gawthorpe Hall in Lancashire.

Major Adam Bogle and his wife Ethel and the Hon Sybil Montagu of the Douglas Scott family were also subsequent notable occupants of Collyers.

Pevsner describes it as “A peculiar house of 1883 – 4 by Bateman and Keates (Robert Bateman and Butterworth’s pupil H.T. Keates of Petersfield) for Lt. Col. Ughtred Shuttleworth – we have not for many a day seen so strange a design….it is so entirely original as to baffle criticism and must be judged by canons as yet unformulated (The Builder 1884). It is of red brick, red sandstone and roughcast – an unusual combination in this area – the oddities are all in the Free Renaissance decoration, especially on the entrance front.”

Robert Bateman, the architect of the house, was actually a painter rather than an architect. His story is told in the interesting book ‘The Lost Pre Raphaelite, the Secret Life and Loves of Robert Bateman’ by Nigel Daly.

During WWII it was an emergency maternity home for evacuees from the Portsmouth area, also for local inhabitants. The children born there were given silver spoons.

The register of burials for Steep church lists a number of deaths of babies aged in hours and days between 1941 and 1945, who were registered as living at Collyers.

Pevsner – The Buildings of England, Hampshire: Winchester and the North by Bullen, Crook, Hubbuck and Pevsner – 2010