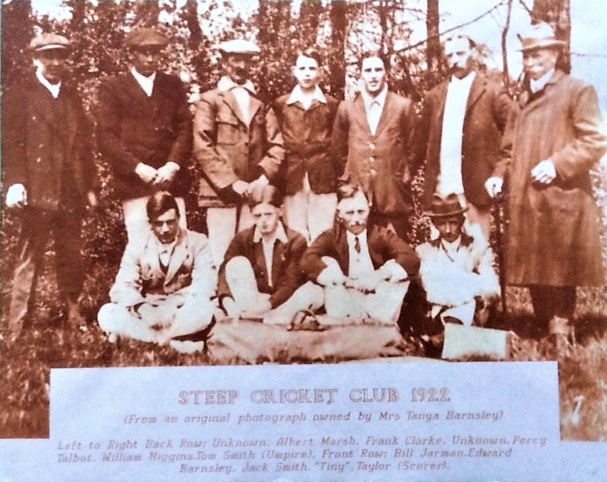 The following account is the first record that I have been able to find of a cricket match being played in Steep, though there may well have been earlier ones.

In 1837, Church Road, Steep was no more than a track across an area of common land. Steep was a community of largely isolated farms with small hamlets at Dunhill, Ashford and Steep Marsh. The widowed Admiral Edward Hawker had recently come to live with his family at Ashford Lodge. He may well have been one of the instigators of this match. His son William Henry Hawker, later to become vicar of Steep in 1868, would have been about nine years old. It is reported that William Hawker later wrote of a cricket match that took place between local farmers in his diaries. The following account seems to have been something similar.

The earliest record found of a local game was that played on 9th June 1837. A report the following week in the Hampshire Advertiser newspaper gives details. The match was played on Steep Common between two teams picked from the farmers of Steep and those of neighbouring parishes. The weather was somewhat unfavourable, but not so much that it hindered the play. About 500 people came to watch and join in the later proceedings. After the first innings, the players and their guests, numbering about thirty six in all, sat down to an excellent lunch. One presumes this meal was outside, or possibly in tents, as in 1837 neither the Steep National School, the Victorian School, or Bedales were present in the village. Suitably fortified, the teams played the second innings after this meal. The local spectators must have been overjoyed to watch the Steep side become the victors, Sadly the score is not recorded. After the match ended, all kinds of rural sports took place. There was climbing the greasy pole, a sack race, diving for oranges, eating treacled rolls and ‘women running for tea’. One presumes the latter was a women’s race perhaps running with tea trays. It is heartening to think that the women also had a special place in the jollities, rather than their usual subservient role. The account generally paints a cheery picture of the people of Steep and others from nearby, enjoying a heartily good day of entertainment both sporting and otherwise, with ‘much mirth’.

The History of Cricket in Steep

There is an account by Rollo Wicksteed about the History of Steep Cricket on the Steep Cricket website. http://www.steepcc.co.uk/history.html

The article below is based on this account, as well as on the piece in the Harrow Scrapbook of 2014 – a collection compiled by Elaine Ballantine – produced as a tribute to John Dodd who had died in December 2013.

Cricket has had an important place in local history for at least 250 years. It is conceivable that Steep villagers may have been amongst the thousands who flocked to Broadha’penny Down in the late 1700s, when Hambledon took on, and beat, the might of England, with Petersfield’s John Small among the stars.

During Victorian times local M.P. William Nicholson, was a great enthusiast and used some of the fortune he had gained through the manufacture and sale of gin, to help finance the magnificent pavilion at Lord’s.

The earliest record of cricket in Steep dates back to the 1837 – see the above account. It is said that the Rev. William Hawker of Ashford Lodge, curate of Steep, and then its vicar from 1868, mentioned in his diaries a match between the single and the married farmers. The 1841 Steep Tithe Map shows a field named ‘Cricket Orchard’ which was near Steep Mill and part of the Ashford Manor estate. There are, however, no accounts of cricket being played there.

Steep Cricket Club was founded about 1893. It is possible that it was formed by the vicar, the Rev E. L. Puxley, and the schoolmaster, Mr J. W. Skillington, in order to keep villagers out of public houses and to provide a more constructive activity. The original club rules set a high moral tone with a fine of 3d for “improper Language”. Rules specifically forbade the use of any club funds for “refreshments”.

In the 1930s, Willian Dodd, who had been born in Kettlebrook Cottages, achieved a certain measure of cricketing fame for Steep. He was the nephew of Arthur Millington Dodd, the landlord of the Harrow Inn. William Dodd played occasional games for Hampshire. He was by then a policeman in Southampton and played a dozen or so times between 1931 and 1936 as an amateur. One of his team-mates was Lord Tennyson. His debut was against a Nottinghamshire side which boasted Harold Larwood, a matter of months before the notorious “body line” tour. William had the good sense to be dismissed for a duck before Larwood could get at him. Over five summers his career figures were 95 runs and 10 wickets. This was perhaps modest, but he remains the only Steep born cricketer to play for the county.

In the late 1940s a group of returning ex servicemen resolved to resuscitate the Steep cricket club that had lain dormant during WWII. However, the members of the old club were not keen to have their club usurped by newcomers. They refused to allow them to use either the ground or their equipment. The newcomers were led by Eddie and Sid McCutcheon with support from “Ickle” Crane and “Rasher” Leggatt and others. Matches were arranged on Steep Common and in the fields at Johnson’s Farm. They called themselves Steep (1948). Mr Levi, of the local Itshide Company, lived at Steep Farm and owned the cricket ground. Eventually, he arranged a deal between the old and new Steep cricketing factions. The new side was firmly based at the Harrow Inn. Eddie McCutcheon would later marry Ellen, the landlord’s daughter. Her brothers, Haden and John were also useful players. Nourishing match teas were served in the Harrow garden.

Since those pioneer days, Steep has bought the freehold of the ground, now one of the best in the locality, and built its own pavilion. The present pavilion cost about the same to construct as the one financed for MCC by William Nicholson.

In the years that followed, Steep cricket continued to be firmly associated with the Harrow Inn. The pub was the backdrop to a TV documentary about the club.  There were high days in the 1970s when the Club were Hampshire Village Champions five times and represented Hampshire villages against Surrey, Sussex, Kent, Wiltshire, Oxfordshire, Buckinghamshire, Gloucester and Cornwall. A crowd of about one thousand circled the Steep ground when Steep village was narrowly defeated by Nottinghamshire champions Collingham, to be denied a place in the Lord’s final.

Steep Cricket Club continues to play a central role in the life of Steep village in the twenty first century.

Faces of Steep from the Past

Ifould, Sarah (later Welch) 1816 – 1898, the member of the Ifould family who emigrated to America