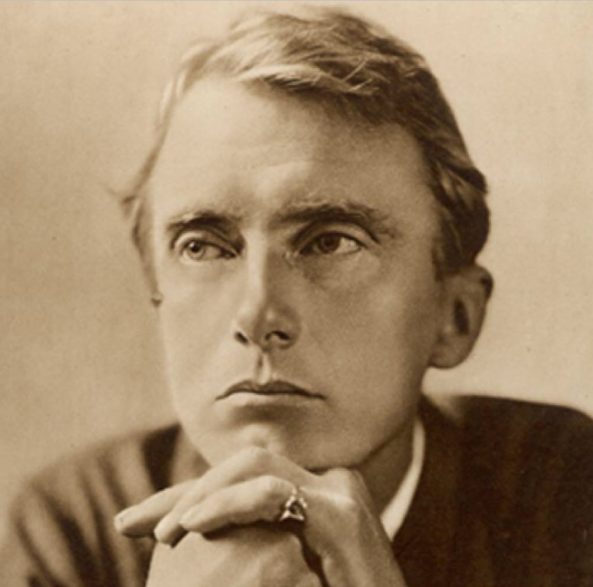 For a full account of Edward Thomas’s life see more on The Edward Thomas Fellowship website (link below) and books listed here and in the Books section of this website. Edward Thomas lived in the Steep & Froxfield area for about ten years 1906-1916. The family came to send their two older children Merfyn & Bronwen to Dunhurst/Bedales School. Edward Thomas did not teach at Bedales School, but his wife Helen did some teaching at the Bedales junior school: Dunhurst.

The Thomas family were at Berryfield, Ashford Lane, Steep 1906-1909. The house is south of the Ashford Lane up a few steps in the bank. It is behind a wall/fence/hedge and cannot easily be seen from the lane. Berryfield is Grade II listed.

“Berryfield Cottage was all they (Thomas Family) could have hoped for, friendly, domestic, restful.” It is a farmhouse in the local vernacular style – malmstone with bricks at the corners and framing the doors and windows and tiled roof. The house dates from 1820. The farmhouse, now cottage, faces west, its garden sideways on the lane. Northward is the great backcloth of the Hangers; Berryfield Hanger and the Shoulder of Mutton, to the right Wheatham Hill, to the left the deep re-entrant of Lutcombe descending from the rim of the scarp at Week Green to the site of the ford. From  Whiteman ‘The Edward Thomas Country’

The Thomas family rented the house. Having moved to Berryfield in 1906, in 1908 the Ashford Estate was broken up and sold and the Thomas Family had to move on.

They moved to the top of the Hangers to a house built for them by  Geoffrey Lupton, the Red House in Cockshott Lane the following year. (1909) They lived there 1909-1913. Edward’s younger daughter Myfanwy was born there. Edward found the wind and the mist depressing and didn’t like this house.

It is the subject of the poem on the Edward Thomas windows at Steep church.

It is at the Cricketers end of Church Road and lies back from the road. The Thomas family rented this house.

Yew Tree Cottages were built in 1913 and are in three pairs, two near the road, the other middle pair at the rear. No 2 was the Thomas Family home, after their move down from the Red House, Froxfield. It was the right hand cottage of the middle pair behind the others. They were built for labourers and had no bathroom or inside lavatory, but such things were not expected in a country cottage. They can be seen today to exemplify the friendly, unpretentious domestic idiom of the period.

“….will remember, with that bitter scent,

Topping a hedge, a bent path to a door,

A low thick bush beside the door, and me

Forbidding her to pick.”

“The bent path must strike every visitor to No.2. A narrow path rises from the road to the rear pair of cottages and suddenly forks, bending right to reach the house door at the side.” Info from William Whiteman.

A commemorative plaque at the front of the house records – “Edward Thomas Poet & Helen his wife lived here 1913 – 1916”. Edward Thomas was living at this house in 1916 when he joined the army. The family moved away to Kent after that.

Other places In Steep connected to Edward Thomas:

Poets Stone on the Shoulder of Mutton Hill – erected 1937.  There is information on this in the Buildings and Farms section of this website.

The Cricketers Inn and Crossroads- Subject of the poem ‘Aspens’. The aspens no longer exist. The inn is the Cricketers. The smithy is now Owens Bike Shop

Edward Thomas second house in this area, The Red House, was not in Steep but at the top of the Ashford Hangers in the adjacent village of Froxfield.

Is usually unlocked in daylight hours. Near the door, there should be information boards about the church. The Church War Memorial (to the left of the door as you enter) bears his name. There should be a folder of information nearby about all of the names on the memorial including Edward Thomas.

The Whistler Windows on the South Wall of the church: They were etched by Laurence Whistler, brother of artist Rex Whistler. The right hand window was smashed in a burglary in 2010. It has been replaced but is not by Whistler. The broken window is displayed to the right of these windows – kept as an artwork in its own right. There is a switch nearby which illuminates the windows. Information about Edward Thomas and items for sale about Thomas are on the window sill. Leave money in the wall safe slot to the right of the main door as you exit. See also

More information about Edward Thomas in Steep is available from:

Under Storms Wing by Helen Thomas – an easy read, worth reading, but not strictly accurate in all parts:

See more books about Edward Thomas in the Books section of this website here Books about Steep, its History and those who have lived in Steep

Nick Denton’s website uses Edward Thomas’s field notebooks to track the places where the poet walked and the poems which he composed around them.

If you are looking for this house it is behind the other two pairs of similar cottages at the western end of Church Road. Look for a narrow path between the cottages that front Church Road and a No Parking sign. Walk a few steps along this path and you will come to the former Thomas cottage – the right hand one of the pair here. There is a plaque on the wall.