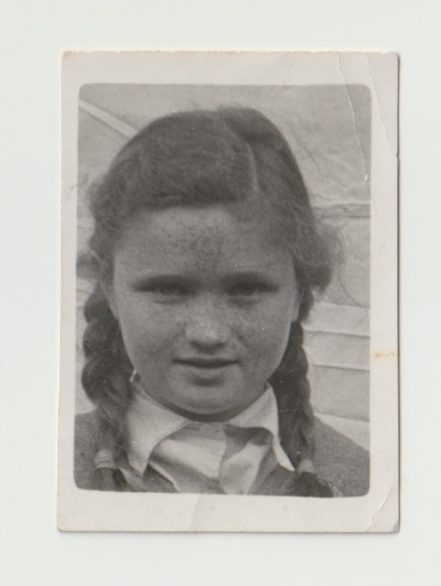 Elizabeth moved to Steep as a small child in 1943. She attended Steep School, Dunhurst School and Bedales, leaving there in 1955 before going to university. Her parents were Bill and Fanny Slater. Her father, Bill Slater, taught geography and economics at Bedales from 1943 to 1963. He died in 1980. Her mother, Fanny Slater, was a Steep parish councillor. The family lived in Steep at Foxcote in Church Road, at Bedales Lodge and their final home was at Sandsbury Cottage, Dunhill.
Elizabeth has lived in Canada for many years. I am most grateful to her for getting in touch and sharing the following memories of Steep in the 1940s and 1950s:

When we lived in Foxcote during the war we would see Italian prisoners of war in the village. They were housed in a Nissan hut along the Stroud road and worked on farms around. A Dutch family, the Van Puttens, lived just opposite Foxcote, at Little Hawsted and some Dutch merchant marine men lived with them after the Germans occupied Holland – they had been at sea and were unable to return home. I remember them because one of them whittled me a very nice boat – a present for a little girl! Earlier some Dutch navy sailors were at Foxcote during WWII, but were no longer there by the time that we arrived in 1943. To the best of my knowledge the merchant marine sailors lived in a building on the Little Hawsted estate, back from the road and very close to where Biff and Eileen Barker lived.

We lived at the east end of Foxcote, close to Wavy Lodge and the entrance to Bedales. Wavy Lodge was so named because it was a large ramshackle shed where radio experiments were done by Bedales boys, one being Peter Eckersley who later became the Chief Engineer of the BBC. The other end of Foxcote was occupied by Bill and Ruby Jarman and their two boys, Basil and Roger. Bill was the chief maintenance man at Bedales and Ruby was a cook. Roger was my age and we attended Steep Primary School together where the excellent teacher, Miss Peel, kept us busy although we still got up to some mischief I remember but will not recount.

I think Wavy Lodge must have been extended during the twenties or thirties because it seemed twice the size of the building in the photos sent – maybe it was because I was little! But I do actually think it was bigger – these look more like a shed whereas I remember it as more like the size of a small house – just one room though. It wasn’t much in use when we were at Foxcote – its heyday had been before the war, although I think Freddy Meier, the scientist headmaster of Bedales who hired my Dad, used it at times.

There were some tall Scots pine trees near there and I well remember a Bedales outdoor work squad felling them amid much anxiety and then joy when they crashed – anxiety because it was somewhat amateurish. A boy had to climb up the tree to place the rope and then those pulling the rope had to do so in a direction which avoided the tree from falling onto the other trees, the kids or the two horses, Damsel and Blossom, that were pastured there. In the photo I sent of my sister and me sitting in that field, we are sitting on one of the stumps.

My father, Bill Slater, had an allotment across the road from the War Memorial (Church and Mill road) where we grew all our vegetables and came to know several villagers, such as Mr Ifould. My Dad kept a few hens primarily for their eggs, and when one of them had to be killed he was unable to do it. He walked along the road from Foxcote to the Ifould’s house at Rose Cottage holding the hen under his arm, with my sister and myself tagging along. Mr Ifould would immediately twist the poor hen’s neck in front of us and his wife plucked it and prepared it for us to eat! At that time food rationing was still in place and so this hen was a welcome addition to our family’s meat ration.

Two families that were well known at the time in Steep were the Crumps, Geoffrey and Barbara, and the Dodds who were the pub owners of the Harrow. Geoffrey Crump taught at the Royal Academy of Dramatic Art and was the person who put on the Shakespeare plays every summer at Lord Horder’s estate – I worked there for him during several seasons as a program seller, a costume maker etc. Geoffrey’s wife, Barbara, was the Bedales librarian for many years. From that experience I got to know some Shakespeare plays very well. Ellen Dodd inherited the pub after her parents passed on. John Dodd, her brother, was my age and we shared a desk at Steep primary school when I was there between 1943 and 1947.

Rollo Wicksteed was headboy when I was at Bedales. It was either he or Sandy Murray (another prefect) who on the 6th Feb 1952 rushed out of the prefects’ room into the Bedales Quad yelling ‘The King is Dead. Long live the Queen.’ That I definitely remember – it was so dramatic.

Cecily Roberts was the secretary at Bedales but better known to me as a bellringer because it was she who introduced me to bell-ringing at the church, which I did for several years. During that time Andrew Routh joined our bell ringing team. His son Hugh joined after I left. I enjoyed bell ringing greatly and have many good memories of bellringing in Steep. Three stand out:
1.   In the early fifties our bellringing team was asked to ring for a Society wedding and we each received 2/6d (1/8 of a pound) for this – my first earned money.
2.   On the 3rd June, 1953 we ‘fired the bells’ 100 times for the Coronation. Firing the bells means that they are all rung at once, requiring quite a skill given the differing weights of the bells, and we were told it was only allowed for Coronations so I suppose it has never been done since. It made a huge racket in the village.
3.   In our team of six there was a stout elderly lady, Miss Robertson, who lived on Bell Hill and walked up to the church each Sunday morning to ring for the service and each Tuesday evening for our practices. She was kindly and humorous. One time when she was ringing, the stay of her bell broke which meant the bell above us in the belfry wildly rotated pulling the rope up into the belfry. Miss Robertson, hanging on to the rope, went sailing up to the ceiling, causing the rest of us much consternation and I must say, amusement. She hung on desperately and finally the rope descended along with her – she was not hurt and laughed about it later.

I remember the Frank Clark family. I am not sure but I think it was his son who delivered the milk in the village in the late forties. He drove a vehicle like a golf cart, standing up in it, and at times he would let me or my sister go with him up to the Church and we would take the bottles to each door en route for him. For us it was a treat because we very rarely got a ride in a car.

In my late teens I actually lived in London with Timmy Crump’s family for two years and then with the Eckersley family for 10 months, arrangements made through the Bedales librarian, Barbara Crump.  Bedalians always have helped each other out.

I hope these anecdotes may amuse you. It has given me some pleasure thinking back on those days – last time I visited Steep, four years ago, I could not believe how many cars were parked up Church Road. When I lived there nobody owned a car and there were none parked on the road. At that time Foxcote was known as that, rather than the present ‘Foxcot’. Also the road through Steep was not known as Church Road. Our address was just Foxcote, Steep – the houses all had names not numbers.

Elizabeth’s sister, Anne Hagborg (née Slater), has also recorded her memories in this section of the website.

If you have memories of Steep in the past we are always pleased to hear from you. Please email through the ‘Contact Us’ section of the website. Fran Box