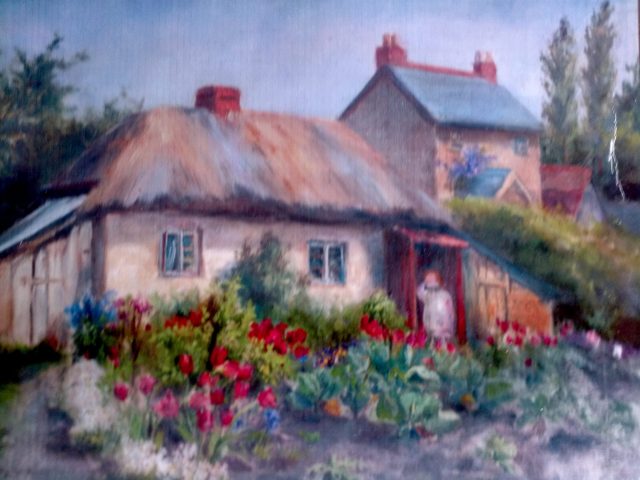 The Ifould family were an old and well known family of Steep. Over the years, various Ifoulds have lived at Rose Cottage in Church Road. There are Ifoulds in Steep church registers from 1815. Thomas Frank Ifould and his wife Laura lived at Rose Cottage in Church Road from 1901. And before that they had been at Tanyard Cottages and at Church Farm (now the site of Bedales School).

By 1911, Mr Ifould was employed as a gardener and there were at least six children in the family, including twins John and Ellen, born 1893, who had both attended Steep School. Ellen left school at the age of fourteen years to ‘help mother at home’. A year later she was keeping company with one Harry Moss, a carter, who lived with his widowed father, James Moss, at 14 Ramshill in Petersfield. Ellen’s father, Thomas Frank, tried to discourage the relationship, as he thought she was too young. However, she was never as happy as when she was with Harry, so he did not persist.

By the age of 17 years, Ellen had worked in service in Petersfield and Bournemouth, but at the end of 1909 she moved to live and work in service at Addlestone in Surrey – a position she had held for two months. She had been pleased to get a job there as it was near to Harry. Aged 18 years, he was working as a carter at Walton on Thames, where his employer was pleased with him. But then Ellen wrote to her mother to say that she must leave her job because she was ‘not quite servant enough’. One wonders quite what was meant by this, but it may have just implied that she was young and not quite experienced enough for the position. She was sorry to be leaving as she liked the place and it was near to Harry. She told her mother that she would be back home on Saturday, but the couple actually returned to Petersfield on Thursday, 6th January 1910.

Harry had told his father he was coming home for a short holiday. Ellen slept the Thursday night with Caroline Medus who was Harry’s father’s housekeeper. On Friday, the couple visited Elsted together; Ellen returned to the Moss household and wrote letters in the afternoon. That evening a party was held at Harry’s father’s house at14 Ramshill Petersfield. Ellen seemed down hearted at the party, refusing to sing when asked. Harry also began to cry when he spoke to his sister in law. He later gave his father his watch and chain asking him to keep it in remembrance of him.

At about 10.30pm Ellen was waiting outside with her hat on and Harry was seen in the hallway with tears in his eyes. Someone asked if they were all right, but Ellen replied’ “I am all right now,” and Harry said, “No, but you might hear something more in a day or two.” He told his brother that they were going to Ellen’s home in Steep and would stay the night there. The way was across fields and involved crossing the railway line. They were last seen at the end of North Road in Petersfield.

At 6.45am on Saturday morning, 8th January 1910, Charles Adams of the London and South Western Railway Company was on relief duty at Sheet Railway Crossing. As he walked along the line, he came across two decapitated bodies just outside of the downline and about 500 yards from Petersfield Station. He went to station and reported it. Dr Brownfield was called. After he had seen the bodies, Police Constable Coster arranged for them to be taken to the mortuary. The clothes were soaking wet and bloodstained. Dry clothing belonging to Ellen and Harry was later found at a nearby stream. In the pocket of Harry’s jacket was a letter to his father and another written by Ellen to her mother. They both stated the couple’s intention to die together. There was also a kind of will from Ellen, words to the songs “The Sailor’s Farewell” and “Break the News to Mother” and a ticket for a box that Ellen had left at Petersfield Station. This box was later found to contain another letter written the previous month, on 5th Dec 1909, again stating the couple’s intention to die together. None of the letters had been sent.

It seemed that the couple had first tried to drown themselves in the fast flowing stream, but it was too shallow. They then lay down side by side at the railway line with their heads on the rails. A train passed the spot just before midnight on the Friday evening. William Battricks of Nine Elms, London was the driver of the 10.27pm train from Waterloo on Friday. He said he had noticed nothing on the line. However, the train was inspected at Fratton and blood marks were found underneath when it was examined by Railway Police Department.

In summing up at the inquest, the coroner, Mr Leonard Warner, said that the couple seemed happy enough at home, but when the girl had to leave the neighbourhood where her young man was, it seemed to distress them and make them think that they were hard used by the world. No blame could be attached to the parents in the matter. The jury found a verdict of suicide and expressed sympathy with the parents.

Laura Ifould (Ellen’s mother) died in August 1911 at the age of only 47 years. She was buried at Steep churchyard.

The couple had a son, Henry, who was baptised at Steep church on 10th January 1915.

Having gone to Australia in 1914, Ellen’s twin brother John joined the Australian Imperial Force at the start of WWI. He was killed in action in France on 24th June 1916 aged 23 years. He was buried at ‘Y’ Farm Military Cemetery, Bois-Grenier.

Rose Cottage was considerably extended by subsequent owners in the 1990s. It now bears little resemblance to the painting.

There is more about Ifould family members and their houses in Steep here:

Descendants of the Ifould family: David Selby and Dave Ifould.