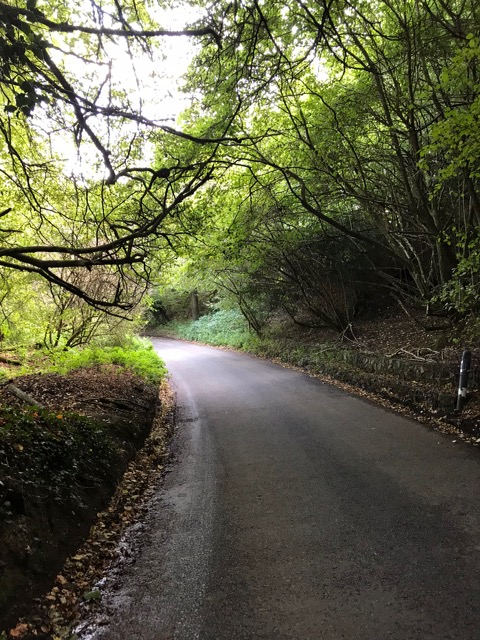 The following edited account by T. A. Melville written in 1949, is from a compendium in Steep church archives. One might guess that it took place on the hill leading from the Harrow Inn to Church Road, Steep. N.B. The dates mentioned by Frank Clark are his recollections and not strictly accurate.

It was January 1946. I had just dismounted to walk the bicycle up the incline when I met a tired looking old man leaning on a hedge wiping the mud from his boots on to the grass verge. It was Frank Clarke, the farmer, he resumed his uphill dawdle. In exchanging greetings, I asked if he climbed the hill every day. “Gracious,” said he, “I’ve come up and down here nearly every day since I started work seventy years ago. I was only nine then.”

“Yes, but there were no schools round here in those days. I worked at Island Farm.” He looked towards the old farmhouse three or four hundred yards away. “I used to come from Sheet where my father lived. My job was to look after the horses etc. for two shillings and six pence per week.”

“Why you see that field,” pointing to the land nearest to Island farmhouse, “There used to be a hedge running right across it and my father dug it out and replanted this one – all down that road and up here. We used to get four and sixpence for scything an acre of grass. I used to work in the hop fields where we got four and six pence for digging and heaping up a hundred hillocks. You see that cottage, I applied for a job to look after the owner’s horses and was told the wage would be four and sixpence a week. My father wouldn’t let me go for less than five shillings so I refused.”

We were passing a long neglected copse to which the new owner was devoting some of his leisure. We stopped and talked with our neighbour who was not too sure that he was dealing with it on the right lines. Old Frank knew the copse well – “I don’t think it’s been cut or looked after these fifty years past, not since I cut it myself. We cut the sticks and bundled them. And look at those oaks – no chance of growing into good timber – only useful for firewood. In 1893 when I had a chance of buying the land it had a fine lot of oak. This was part of old Frank Duddy’s estate; Bedales bought the other part where the school is now but they didn’t buy this. Later Mr Powell bought some acres of it on the opposite side of the road from Bedales and built his house (Little Hawsted) there. That was about 1893 and before ‘Hither Northfield’ and ‘Merries’ were built. You know ‘The Camp’? Before it was built there was a pond there. I dug it out several times and later they got me to fill it in and the bungalow called ‘The Camp’ was erected on the site of the pond.”

“Things here were very different in my young days; there was only a single line of railway in these parts; I remember when they doubled the line; it must have been about 70 years ago. And you know in those days there were banks but they used to send their money in bags, by cart. My wife told me that once, they didn’t tie up a bag properly. It was being carted from Froxfield to Petersfield and on the way down the hill, the sovereigns were trickling out. That cottage – pointing to the one already mentioned – was built with sovereigns picked up by the man who followed the cart down the hill.” And we both laughed heartily. “Mind you,” he added, “I can only say that is what my wife used to tell me.”

Alas Frank Clarke left us this morning. Steep will miss his friendly greeting, the twinkling eye and the happy, smiling, kindly face.

Steep Parish registers record a Frank Clarke as baptised on 9th March 1867 and buried 3rd Feb 1949 aged 81 years. This is possibly be the same person. Frank Clark was a small farmer who lived at Pembridge Villa in Church Road from where he ran a dairy with his daughter Louie.

The bungalow named ‘The Camp’ no longer exists. Steep vicarage & the adjacent house (nos. 77 and 75) Church Road have since been built on this site.

In 2021 Elizabeth Briemberg née Slater sent some memories of Steep in 1940s to the website. Here is her recollection of the Clarke family:

The Frank Clarke family: I am not sure but I think it was his son who delivered the milk in the village in the late forties. He drove a vehicle like a golf cart, standing up in it, and at times he would let me or my sister go with him up to the Church and we would take the bottles to each door en route for him. For us it was a treat because we very rarely got a ride in a car.