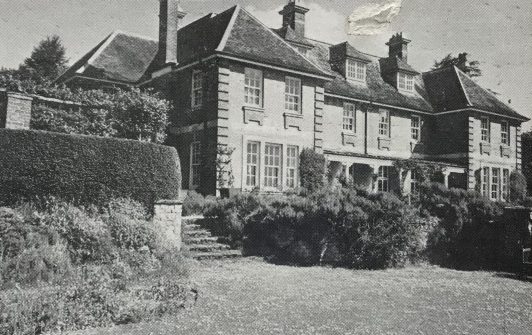 Island House was built on land that was originally part of the Ashford Manor/Lodge estate, owned by the Hawker family in the C19. In 1901 Eugenia Hawker, widow of Rev William Hawker died. The estate was to pass to her granddaughter Dorothy in 1907 when she came of age.  In November 1902 Island Farm and the surrounding paddocks were purchased by Mrs Georgemma Falconer for £4000 plus the timber valuation. In 1903-4 Island House and its premises were built on land that had previously been fields adjacent to the Island Farm buildings.

The house consisted of:

Island Farm and its paddocks were also part of the Island estate.

The architect of the house was Harry Inigo Triggs of Messrs Unsworth & Triggs architects Petersfield. (according to Island History by P Baillon)

Harry Inigo Triggs (1876-1923) had been born in Chiswick. His father was a carpet agent. Triggs was an English country house architect, designer of formal gardens and author of books on town planning. He had travelled around the Mediterranean & was influenced by Italianate garden design.  He was also keen to recapture elements of old medieval gardens. His books influenced the Italian mode of Arts and Crafts style in England. He died in Taormina, Sicily. He worked with William and later Gerald Unsworth in their Petersfield practice. His home was at Little Boarhunt at Liphook, previously Fry’s Farm. In Steep, he designed the gardens at Ashford Chace, Garden Hill, Little Langleys, Restalls, Stonerwood Park. He also designed Steep & Petersfield war memorials.

The 2017 Pevsner describes Island House as a: “William and Mary revival of about 1904. Quite convincing. Terraced gardens by H. Inigo Triggs nicely restored and sympathetically extended, with outbuildings in Arts and Crafts style by Jill Manson.”

The book ‘Gardens for Small Country Houses’ by Gertrude Jekyll and Laurence Weaver pub 1912 mentions the garden at Island and has four pictures.

In this book, the following information appears:

The Treatment of Small Sites:

“The paved garden at Island Steep illustrates a practical point of importance. The beds are arranged in such a way that all work on the flowers can be done from the paved paths. This is useful in many cases where ladies do not leave pruning etc., to the gardener, and like to do the work dryshod. In this garden the parterre is sunk about 18 inches below the general level, and there are bands of turf above and below the retaining wall but not among the flower beds.” page 59

“Great variety is to be attained by a happy conjunction of straight with curved steps, as seen here, which shows also the value of rough piers to mark the break in the retaining wall. This example is chosen from Island Steep, designed by Messrs. Unsworth and Triggs. A similar treatment is illustrated at Ewelme Down” p92-3

“To the same architects is due the manipulation of simple elements in a garden at Island Steep. A double flight of steps leads down from a long upper terrace to a lower one, which juts out over the hillside with a semi circular bastion in front. The curve of the stairs determined the outline of one end of the pool, and the similar of the other end marches (?) with the plan of the lower terrace.” p151-154

Features of local Triggs gardens in Steep seem to be:

Diana Baskervyle-Glegg writing for Country Life on Oct 26th 1995 described Triggs Edwardian designs: ‘often the simplicity of his gardens belies a dramatic incident or surprise element such as the garden at Steep, where on the lower terrace, an oval pool is tucked beneath the retaining wall. Unseen from the above until the steps are reached, the pool reflects in its mirror of water. The sunken rose garden was the set piece of almost every Triggs garden, often with a lily pool in the middle. At Island, on an upper level, a pergola with brick columns and oak cross beams runs the length of the sunken rose garden on the east side of the house. The pergola with its cloud of roses framed views of the roses in the beds below.”

Mrs Falconer came to Island House with her second husband Thomas Wentworth Falconer, an ex army man who had also worked abroad as a coffee planter. She had four children from her previous marriage to army officer Edward Le Breton. Thomas Falconer died in 1906. For more details of Gemma’s Falconer’s background and life see: https://historyofsteep.co.uk/portfolio/mrs-gemma-falconer-of-island-steep/

By studying maps of the time it is possible to see that the gardens seem to have been created after the initial building of the house and then with an update perhaps around 1909. They were certainly completed by the time the photographs were taken for inclusion in the Jekyll and Weaver book, which was published in 1912. Mrs Falconer’s daughter Edith, known as Betty, was married in 1909 to Francis Elphinstone-Dalrymple who later succeeded to his father baronetcy. The wedding reception was held at Island.

The gardens had a grand lawn to the east. To the west there was a sunken rose garden, pool and pergola. To the south terraces, paths and steps led down to an oval pool and viewing bastion. There were views to the South Downs beyond. South west of the oval pool, there were vegetable gardens, a greenhouse with a possible water tank beside it and a garden house. The main drive to the house was situated where Island south drive is now. It was lined with lime trees. It ended in a carriage sweep on the eastern side of the house. There seems to have been a service drive which led across the central area that is now wooded, towards the coach house and stables. The 1932 map shows that the carriage sweep had been divided from the main or south drive by this date. It appears that this area and the service drive may perhaps have been used then more for tradespeople and deliveries. Presumably the use of motor cars by this time, meant that there was no longer a need to turn the horse drawn carriages and take them to the stables and coach house.

In 1917 Mrs Falconer departed from Island and by 1919 she was living at Loders in Dorset. Island house, its buildings and farm were leased to May Fitton for a period of twenty years. Two years later in 1919, Mrs Falconer gave Island House to her youngest son Francis ‘in consideration of her natural love and affection towards him’. Mrs Fitton continued to live at Island as his tenant. By 1925 Francis was working as a coffee planter in Kenya and occasionally returning to England. In 1932, he and his young family left for Kenya again and having no need of Island any longer he sold the Island estate to his tenant, May Fitton.

In 1928 an officer from the local council visited Island in order to assess its rateable value for local taxation. His notebook is in the Hampshire Record Office collection. He recorded it as follows:

Limes on the drive

A comfortable and attractive house in excellent repair fitted with electric light (own plant) .

May Fitton and her husband Brig. Gen. Sir Hugh Fitton are of particular interest for a number of reasons, one being their connection with the composer Edward Elgar, his wife Alice and daughter Carice. It is known that Elgar visited Steep and stayed at a house named Little Langleys in 1912. It is not recorded as to whether the Elgars visited Island. For more details of Brigadier General Sir Hugh and May Fitton, their lives and backgrounds see: link to follow, article to be written

In May 1928 May Fitton opened the grounds of Island House for a grand Empire Day event for local children, their teachers, the vicar and local dignitaries. There was a bountiful tea, an entertainer, children’s sports and singing of ‘God Save the King’. A telegram was sent to their majesties to profess the children’s faithful allegiance and service to the throne and Empire. By the end of the afternoon a reply had been received expressing the sincere thanks of the King and Queen to the children for their kind and loyal message.

William Whiteman notes that, “The house was used during 1939 War for East End evacuees.” Indeed evidence for this can be seen in the entry in the 1939 Register for Island.

May Fitton continued to live at Island and participated in a number of charitable and social activities in the life of Steep village and the Petersfield locality. She was a generous benefactor to a number of village causes. She died at Island House in 1954. The house and estate were put up for auction. From pictures in the 1954 brochure, the oval pool seems to have become overgrown. It may have been a casualty of lack of staff during WWII.

The Island estate was purchased for £11,500 by Ernest Trimming, a local builder. He had previously built houses in Oaklands Road and at the bottom of Bell Hill, Petersfield. Island House was converted to three dwellings in the 1950s. The stables and coach house became a further three dwellings. The Lodge was sold. Between 1962 and 1980 plots of the grounds were sold for the building of new larger houses. Fourteen new houses were eventually built, resulting in the present total of 21 dwellings on the site. Initially, Mr Trimming lived at Island; he then built Island Holt for himself and his family. Trimming died in 1976; his widow Marguerite left in 1983. The Islands Residents Association Ltd. had previously been formed to deal with the acquisition and management of communal areas such as the driveways.

At the 1954 auction Henry Clarke, the tenant farmer of Island Farm was able to buy it. In the early 1950s, fields from Island Farm (originally part of the Island estate) came under a compulsory purchase order from the local council. The Hays Cottages council estate was subsequently built. By 2020, a number of these houses were in private ownership.

The gardens of Island West continue to be meticulously presented in 2020. At some point before the time of the present occupant, the roses were removed from the sunken garden, but the pool and pergola still exist. Additional low level buildings have been added in this area to a sympathetic design by Jill Manson. At Island the large eastern lawn, terraces, steps and oval pool still existed in 2011, when Wendy Bishop reported on them for the Hampshire Gardens Trust. Since then, the shape and form has been maintained, but it has not been possible to provide a high level of maintenance.

In 2020, Island maintains a significant presence on the Ashford Hangers of Steep and has become part of the landscape view in that direction. It remains an elegant and imposing house which has played an interesting part in the history of the locality.

Architects drawings for conversion of Island House from Jill Manson

Conversations with Jill Manson. I am most grateful to Jill for her help with the provision of information about Island

The Reputed Manor of Ashford by William Whiteman