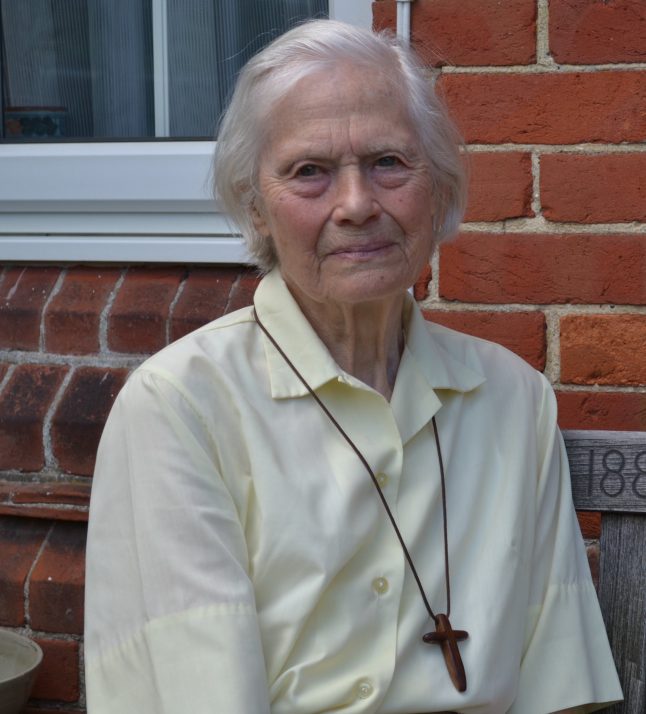 I first went to Bedales as a day pupil in September 1939 but by 1940, I had been offered a boarding place at Bedales, because the school thought it unsafe for me to walk home up Stoner Hill on my own after evening lessons.

As pupils, we were very upset by the war and I was absolutely terrified of boarding. Many children at Bedales had been sent away from their parents because of the war. Yet to separate children, leaving their parents in a dangerous situation can be psychologically cruel. Most children would rather die with their parents, than being in safe place somewhere else.

I remember the agonies of going to the Bedales shelters which were in trenches along the path between Steephurst and the quarry. It was awful for all the children being there and knowing that many parents were still in London. Bombs were dropped here and on the Shoulder of Mutton and on Petersfield. They were dropped by allied pilots returning from raids; they had to get rid of their bombs. It was a very strange time, we were uneasy and unhappy.

One February, when I was aged fifteen years, I decided to run away from school with Peter, a good friend, but not a boyfriend. We planned to go on Sunday so no-one would notice our absence until evening roll call. We hoped to get jobs in a theatre. Peter wanted to be a dancer, but his father was a solicitor and felt that dancing was not a suitable career for a boy. I wrote to my father and told him what we were doing and why. My mother was in hospital at the time because she had had an accident. We withdrew money from our Post Office accounts, left on Sunday morning and took a train. We could only afford a ticket to Bridgwater in Somerset. We said that we were brother and sister and asked everywhere, but no one would give us jobs or rooms. No-one believed our story. We tried sleeping in a field, but in February it was freezing.

We were told that you could always get a bed at a police station, so we turned up at Bridgwater Police station at about 2am. Our story was that we were on convalescent leave from school and on our way to Cornwall. Of course the police did not believe a word we said. We admitted we had come from Bedales but I asked them not to telephone my mother because she was unwell and would be upset. The police rang Bedales who telephoned my father. The police sergeant chuckled threateningly to us and said, “Now you are in for it, you’ll get a hiding!” We were put into a room together and I tried to sleep. I felt bad that we had lied about being brother and sister so I tearfully told the policeman the whole story. My adorable father said that he would come by train to fetch us. Contrary to the policeman’s prediction, he turned up saying, “Where are those lovely children? Come on! We are going to give them a good breakfast and then take them home.” Father laughed and talked, we had a wonderful breakfast and he told Peter that he was going to deal with his father. My father faced him and said, “Come on – these lovely children, we must find out why they are unhappy, why they wanted to leave, we must sort it out for them and make them happy. The first thing we do is to give them a good meal.” My father was irresistible. When we arrived back at school, Peter and I were looked on as heroes by the other pupils.

It was agreed that I was to continue at school for the rest of the term but after that I could leave and find something to fill in until I was sixteen, when I would go to art school to train as a theatre designer. It was agreed that Peter could train as a dancer. He went first to Ballet Rambert and then to Sadler’s Wells ballet and later he became director of Covent Garden ballet. So his father was quite proud of him in the end. I got a part time job with Sadler’s Wells ballet. I made props and touched up scenery. As I was unpaid, I was allowed to stand in the wings for every production so I got to know them all including Margot Fontaine and Ninette de Valois and they were all so very kind to me. I had digs and later a flat in London and eventually went on to art college.

This story was recorded from a 2013 conversation with the late Karin Antonini who died in December 2018.