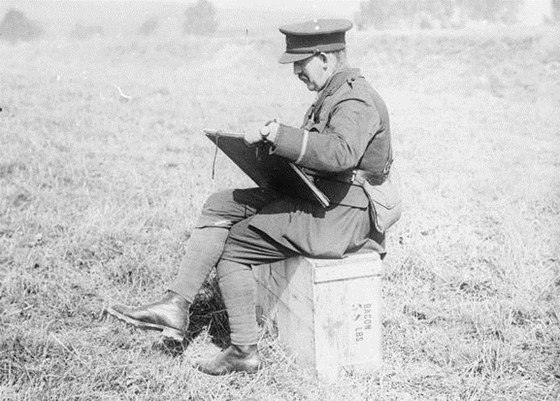 Muirhead Bone in Steep at the house named Byways

The earliest record that I could find of artist Muirhead Bone, his wife Gertrude and their family living in Steep is from the Electoral Registers of 1915. They were at the house named Byways. George Herbert (David) Hooper, Art teacher from Bedales and his wife had previously lived at this house. It is uncertain as to whether Muirhead Bone occupied the house following the Hoopers, or whether there were other occupants between the Hoopers and the Bones. The house is at the junction of Island Farm Lane and Ashford Lane, which perhaps explains its name. It still exists as a private house today. The available Electoral Registers show the Muirhead Bone family living at Byways, Steep from 1915 until at least 1928. In 1918 Bone was marked NM (Naval or Military voter), showing his absence during WWI as a war artist.

It is believed that the Bone family came to live in Steep so that their two sons could attend Bedales School. Stephen Bone, born 13th November 1904 attended Bedales from September 1916 to March 1920. He too would become a noteworthy artist. Gavin, born 21st Oct 1907 attended Bedales from September 1918 to February 1925. He became a lecturer at St John’s, Cambridge, but died in 1942. The family seems to have been living in London, probably at their house in Chiswick, at the births of both of their sons, so perhaps they moved from there to Steep.

The house named Byways and a barn appear on the 1870 OS map, so we know it dates from at least this time and possibly a little earlier. In the 1911 census the house had eight rooms. George Hooper, art master at Bedales School, and his wife Dora were living there. Hooper ceased his art teaching at Bedales in March 1912. Byways, along with two other nearby houses: Garden Hill and Ashford Cottage, was put up for auction on order of ‘The Executrix’ in June 1913. The auction details in the West Sussex Gazette of 8th May 1913 describe the house as having two reception rooms, four bedrooms, a bathroom, the usual offices and a motor garage. It is unclear as to who ‘The Executrix’ or owner of the houses was. It may well have been Dorothy Hawker who had inherited the Hawker lands and properties in Steep when she came of age in 1907. The nearby Ashford Lodge estate and its lands which she owned had been sold in 1911. Dorothy lived in Kent and did not intend to return to the family lands in Steep. These three properties, may well have been the remaining parcels of the estate to be sold.

The house was remodelled in 1913 and became ‘an attractive weekend cottage’. A studio was added by Muirhead Bone. It is unclear as to whether the alterations happened before or after its sale, It is reported that there was an open loggia with a mosaic by Boris Anrep who had created those at the National Gallery. The Bone family lived at Byways from at least 1915. The house would again be much extended in the 1980s.

Locally in Steep, Muirhead Bone was notable for the establishment of Steep War Memorial Village Hall in 1921 and for bringing the artist Stanley Spencer to stay in the village for a period in the same year.

For more on Stanley Spencer in Steep see https://historyofsteep.co.uk/portfolio/stanley-spencer-and-steep/

Lord Beaverbrook promoted the idea in Canada of war memorials in the form of Halls of Remembrance hung with large canvases. After service as a war artist in WWI, Muirhead Bone took up Beaverbrook’s idea and campaigned for the creation of a National Memorial Hall in which war artists’ paintings would be hung. The scheme sadly came to nothing. After that, Bone promoted the erection of local memorial halls like the one in Steep. He was the donor of the largest amount (£108) to the fundraising campaign for the building of the Steep Hall, completed in 1921. Bedales School donated the land. Bone was one of the original trustees of the Hall.

The Dictionary of National Biography entry for Muirhead Bone is as follows:

Bone, Sir Muirhead (1876–1953), printmaker and draughtsman, was born on 23 March 1876 at 1A Hamilton Terrace West, Partick, Glasgow, the fourth of eight children of David Drummond Bone (1841–1911), journalist, and his wife, Elizabeth Millar Crawford (1847–1886), the daughter of a tailor. His parents were both Scottish and he was educated in the Glasgow City Schools, which he left at the age of fourteen; there he made friends with Francis Dodd, whose sister he later married. From 1891 to 1894 he served an apprenticeship in a small Glasgow architect’s office; at the same time, he attended Archibald Kay’s evening classes at the Glasgow School of Art, later moving on to those of Francis Newbery. Bone gave up the idea of a career in architecture, however, and in 1897 took a small studio, joined the Glasgow Art Club, began to experiment with lithography, and first visited London. Two of his drawings of Glasgow were published by John Lane in the final volume of the Yellow Book (1897), following an introduction to Lane by John Buchan. The following year he acquired a printing press from D. Y. Cameron and learned etching.

Bone returned to London in 1899, taking a set of his first published prints, Six Etchings of Glasgow, with him and staying for a month. The set included Shipbuilders, Whiteinch, and The Old Jail, an impression of which was exhibited at the New English Art Club, lent by William Rothenstein. Bone contributed both illustrations and much of the text to the classic portrait of the city, Glasgow in 1901, written with his brother, James Bone, and Archibald Hamilton Charteris. Published under the nom de plume James Hamilton Muir, this proved to be Bone’s farewell to Glasgow: later that year he moved permanently to London.

Bone’s first London exhibition was mounted by Oscar Wilde’s executor, Robert Ross, at his Carfax Gallery in Ryder Street in 1902. It included etchings, drawings, and oil paintings, one of which—Snowy Morning, Queen Margaret College, Glasgow (1897)—is now in the Tate collection. Bone had lodgings in the Temple near Newgate prison, which was about to be demolished, and the Strand, which was then being relaid for the coronation procession: he made a series of drawings of both subjects, by night. The following summer he toured country towns, producing a portfolio of Ten Drypoints which was published by Obach & Co. in 1904; it included Old and New Gaiety Theatres, Southampton and Chiswick. An advance of £70 enabled him in 1903, after a five-year engagement, to marry the writer Gertrude Helena Dodd (1876–1962), daughter of Benjamin Dodd, a Methodist minister; they moved to Thamescote, Chiswick Mall. They had two sons, the painter Stephen Bone (1904–1958) who married the mural artist Mary Adshead (1904–1995), and Gavin Bone (1907–1942) who was also an artist. Neither was able to emulate their father’s success.

This period also saw the foundation of the Society of Twelve, dedicated to promoting prints and drawings, of which Bone was secretary. The group included Augustus John, Edward Gordon Craig, David Young Cameron, William Nicholson, and William Strang. Later, William Orpen and Walter Sickert showed in the society’s seven exhibitions which were held at Obach & Co. between 1904 and 1915. By this time Bone had established himself in London and he hit his stride with a succession of magnificent drypoints, on which his artistic reputation is built: The Shot Tower (1904), Somerset House (1905), Demolition of St James’s Hall, Interior and The Great Gantry, Charing Cross Station (1906), and The Ballantrae Road (1907). A visit to Scotland produced his masterpiece, Ayr Prison (1905), a building at the end of Wellington Square, where he had had a studio in 1900. Such was Bone’s standing that, in 1909, a catalogue of his 225 etchings and drypoints done between 1898 and 1907, compiled by Campbell Dodgson, keeper of prints and drawings at the British Museum, was published. Dodgson’s continuation of the catalogue to 1916 was published in the Print Collector’s Quarterly in 1922, and he maintained a manuscript list of the remainder of Bone’s output.

Bone continued to travel, visiting Italy in 1910 and Holland in 1913. His most important drypoints of this period were Rainy Night in Rome (1913) and Piccadilly Circus (1915), both dramatically lit night scenes. A grimmer excursion followed: in 1916 William Rothenstein, a fellow member of the Society of Twelve, proposed a scheme for sending artists to the Front to record the First World War and Bone was the first to be appointed. He was sent to France in August 1916, and later joined the fleet. His drawings were published in ten issues of the Western Front, each described by C. E. Montague. Bone was a moving spirit behind the foundation of the Imperial War Museum and was appointed a trustee in 1920. He gave the museum 400 of his own drawings and watercolours, and set up a fund of £2000 to buy works by younger artists with the proceeds of his own sales.

By 1916 Muirhead Bone had made 356 etchings and drypoints, and although he continued to make memorable prints in the inter-war period, his output was reduced. He became a trustee of the Tate Gallery in 1920 and served until 1927. On a voyage to America in 1923 he met Joseph Conrad and made three drypoint portraits of him. His most important prints of this period, however, were A Manhattan Excavation, Stockholm (1923), and A Spanish Good Friday (1925). He illustrated a book by his brother James, The London Perambulator (1925), and travelled abroad extensively with his wife. They collaborated on several books, including Children’s Children (1908), Old Spain (1936), and Days in Old Spain (1938). Bone made his final drypoint in 1939: the last phase of his work in printmaking saw two major works, Windy Night Stockholm (1935) and Railway Sheds, Marseilles (1937).

Bone became an important and perceptive patron, and an early buyer of work by Stanley Spencer and Mark Gertler. He was a supporter of Jacob Epstein and made drawings for the installation of his controversial sculpture Rima in Hyde Park: both Spencer and Epstein made portraits of Bone. He also gave David Bomberg the money to travel to Palestine in 1923. He continued to practise draughtsmanship, and in 1930 and 1931 had two large exhibitions of drawings of Spain at Colnaghi’s. When the Second World War broke out, Bone was again the first war artist to be appointed. He worked principally for the Admiralty, but his most important work is the huge chalk and ink drawing St Bride’s and the City after the Fire, 29th December 1940 (Imperial War Museum, London) which measures 198 by 112 cm. He was also made a trustee of the National Gallery (1941–8) and reappointed to the Tate Gallery (1942–6).

In total, Bone made 478 etchings and drypoints, as well as a number of lithographs and thousands of drawings and watercolours. The most important collections of his work are those in the British Museum, the Hunterian Art Gallery, Glasgow (the Leonard Gow collection), the Imperial War Museum, the Tate collection, and the Boston Public Library, Massachusetts. During the 1920s he was an established and successful artist, and he grew wealthy during the etching boom which lasted until 1929. Kenneth Clark, who admired him both as a man and an artist, described him as ‘one of the most honest, warm-hearted and unselfish men I have ever known’ (Another Part of the Wood: a Self-Portrait, 1974, 59). He was among the greatest British draughtsmen, and his images of cities, particularly buildings being built or demolished, display extraordinary technical skill.

Bone was knighted in 1937, and received honorary degrees from the universities of Oxford (DLitt), Glasgow, St Andrews, and Liverpool (LLD). He died of leukaemia at Grayflete, Ferry Hinksey, Oxford, on 21 October 1953, and was buried in Whitegate church, near Northwich, Cheshire. There is a memorial tablet to him in the crypt of St Paul’s Cathedral.

Buildings, Gardens and Monuments in Steep updated 2018 by Struthers, Box, Routh and Storey

Notes on houses in Steep by William Whiteman

Account of History of Steep Village Hall by Rollo Wicksteed