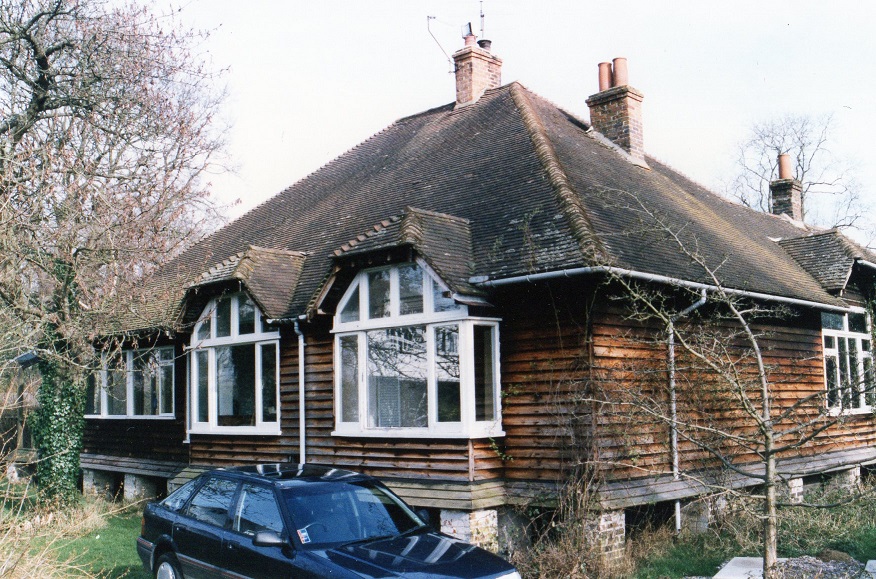 I lived in Steep from 1936 to 1946, aged 7 to 17, at a house called The Camp, so that my brother Roger and I could attend Dunhurst and Bedales Schools as day-boys. Situated opposite the school farm, near Bedales main gate, the house was a big weather-boarded bungalow, raised on four foot brick pillars, built in 1903 by a retired rubber planter from Malaya, on the design of ‘cool’ buildings there – hence the air underneath and the north facing verandas. When we arrived, the house was still a bit primitive, with a single earth closet, the bucket being emptied down the garden by our gardener. Eventually, two WCs were installed, and we entered the modern age. The house was demolished in 1994, and the present vicarage, plus another house, was built in its place. I paid one of my visits soon after the demolition took place and was sad to see the ruins of our old house, and sad too at the loss of three of our four magnificent oak trees.

Our neighbours on one side (in the house now called Pennyfold) were called Melville, and the younger Melville girls, Alison and Jane, were our frequent companions as we cycled all around, and of course scrambling all over the Hangers, climbing trees, making fires, and damming Kettlebrook. We were free to roam all day – no supervision, no health and safety rubbish, and no parental worry.

When war loomed, my father, having served in the trenches in WW1, dug with immense effort in our clay an enormous hole in the garden, into which he lowered a very large disused rainwater tank, as our Air Raid Shelter. Of course, it immediately filled up with water, due to the lack of drainage, and was never used. Instead, we were al-lowed to share a proper professional shelter in the garden of the house next door on the other side, ‘Rozel’, home of the Hon. Mrs Rollo Rus-sell, a dear old lady and friend.

In the early days of the war, before the normal wailing Air raid Warning siren from Petersfield was installed, there was a single note siren atop the Bedales Boiler House, manned by a rota of locals, including my mother. The Alert was an interrupted blast, the All Clear a continuous one, but on one very early occasion, mishearing it and not being sure which was which, we remained in shelter after the All Clear for ages before venturing out. My mother, by the way, also helped make camouflage nets, and assisted in a services canteen in Peters-field.

When the first alert sounded, I expected the sky to open and rain down high explosive on me, as I sheltered under the grand piano. But from then on, as a child, I felt no real fear or apprehension, and just took everything for granted. (Though our parents must have been very worried, particularly during the period when invasion was threatened – and after the war I found out that Petersfield, Steep and the hangers were indeed on the second line of the German objectives).

We saw quite a lot of German bombers, with their distinctive throbbing engine sounds, driven inland from the raids on Portsmouth (the glow from which we could see beyond the Downs), and jettisoning their bombs at random. I believe they hit Petersfield once, on the workhouse, and certainly dropped a stick on the Hangers, just to the east of Shoulder of Mutton Hill. On one occasion, as the Alert sound-ed, I rushed out to the shelter next door, and saw a German bomber, so low and near it was between me and the church steeple. I couldn’t see anyone inside, but I could see and hear machine gun fire, which came from the rear of the aircraft – I was told later that it had opened fire on a man with a horse and cart in Buriton! I also saw a burning Spitfire, which crashed in Harrow Lane. The pilot had bailed out, but sadly he was too low, and his parachute didn’t open. His body was carried past us down the road on a hurdle – very little transport available of course.

Paul Williamson later went on to become an actor.

This account first appeared in the Steep and Stroud Village Newsletter in 2013 and was instigated by the editor David Dobson. Thanks to Hugh Routh for this photograph of The Camp, which was taken as it was being demolished.