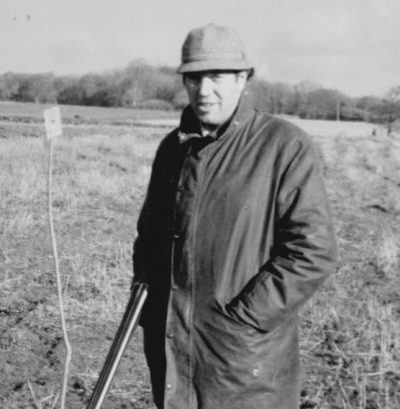 Perhaps little known outside his native Stroud, Peter Winscom admirably epitomised the historic transition of the Petersfield area over the course of the 20th and early 21st centuries from an essentially rural community to a thriving commercial centre.

His father – a tenant farmer on the vast Legge estate in the 1930s, much of which had been inherited from the Bilson family of Buriton in the 18th century – survived the Depression and managed the land with its cereal crops and a few sheep. The Winscom family (Peter’s maternal grandparents and their seven children) had moved to Stroud from Steep Marsh in 1933 where they settled in The Red House on the A272 (below), close to the present-day A3 Petersfield bypass. The ancient Roman Villa (first excavated in 1905) lies on Winscom land, but its presence has never impeded the work of the surrounding farm. The Red House, formerly known as Stroud Farm, stands at the junction of the parishes of Petersfield, Steep, Langrish and Buriton.

Peter Winscom’s father had lived as a young man at Rothercombe Farm in Stroud and served throughout World War 1 in the Hampshire Yeomanry. He took a farm in Milland in 1919, but farmed both there and at Stroud until 1943, when he gave up Milland and bought Dean’s Farm at Weston. So, when his young son Peter first came to Stroud at the age of 12, there were two dairy farms to be managed. Farming was relatively primitive and not very mechanised: there was no mains water until 1936 (electricity came even later), horses were used for ploughing, and a steam engine for threshing. But the Second World War changed everything: tractors and combine harvesters arrived from America, there were special grants allocated to produce as many dairy products and pigs, corn and sheep as possible, and help came from two Land Girls and up to a dozen Canadian soldiers (for potato lifting). Later, there was help available from Conscientious Objectors, but also from Italian and German POWs, who were housed in Nissen huts erected next to Stroud village hall;  some of these men remained in the area after the war.  Peter himself was entitled to stay on the farm as he was in a reserved occupation.

This wartime and immediate postwar period was perhaps Petersfield’s finest hour as a centre for its farming community, with its weekly market in the Square, its busy slaughterhouse (where Tesco now stands), and the South Eastern Farmers’ depot (now the Old Dairy beside the station) which sent churns of locally-produced  milk to London.  Peter had helped his father run Stroud Farm during WW2 and shared the house for a few years with his parents after he married Ann Mason in 1946. He took over the running of the farm and, in 1957, bought a further 150 acres on the east side of the farm (between Stroud and Petersfield), which then totalled over 500 acres altogether and ensured better profits for the family.  When the last Miss Legge died in 1964, Trinity College, Cambridge, bought the estate, but in 1975, Peter and Ann managed to buy their house (The Red House) on Stroud Farm and six acres surrounding it.  By this time, tractors had replaced horses, there were combines instead of binders, milking machines instead of hand milking and refrigerated tankers instead of churns. In the 1960s, Peter was managing commercial Friesian herds of 150-200 cows; in addition, the family were able to purchase four more farms in the neighbourhood and Peter saw the future as rosy. He bought land to both east and west of Petersfield alongside the by-pass.

The next shift in emphasis both for the Winscoms and for Petersfield itself came with the start of initial phase of the development of Petersfield Business Park. This  was created in 1977 when Whitman Laboratories (left), the manufacturing arm of Estee Lauder, purchased a field bordering the Winchester Road. Planning permission was sought, and obtained, from East Hants District Council to build the factory and warehousing on the former Winscom family farmland. This commercial development was the result of a decision taken to designate the area lying at the north-west corner of the town in a Local Plan: the natural void was both logical and laudable and it was mostly local firms who took up the first options on renting properties during Phase 1 of the estate in the early 1980s.

Peter finally retired from running the farm in 1986 and took on a manager, Oliver Howe, who was responsible for the day-to-day organisation of the farm, coping with the masses of EU regulations, cattle passports and the computers which regulate the cattle feed.

The next major change came in 1992 when the Petersfield by-pass was built, driving directly through Winscom farmland and reducing it in size by several acres. In fact, Berelands, an old Trinity College farm with Peter as its tenant for many years, lay in its track but had already been partly demolished by the Great Storm of 1987. This land became the site of the new roundabout linking the A272 to the A3 by the BP garage on the Winchester Road. To compensate for the loss of land, Peter bought the original share of from Trinity College and also, in 1998, the neighbouring Weston Farm which had come onto the market. In addition to this land, Peter and Ann bought New Buildings Farm (above), increasing his total holding to nearly 1,000 acres, which they farmed throughout the 1990s. They kept a stock of 300 cows and a further 400 young stock.  Wheat, barley, oil seed rape and maize were also grown.

Peter not only ran his farm from The Red House, but also participated in the running of Stroud village itself. Besides being a Justice of the Peace, Peter served as Chairman of the local branch of the NFU and was active in the Hampshire Young Farmers Club; he was also a member of Petersfield Round Table, regularly helped at the Le Court Cheshire Home and was for ten years a member of Steep Parochial Church Council. His wife Ann partnered Peter during his long career and was responsible for the farm’s accounts. She, too, was from a local farming family but, like her husband, participated in local affairs: she was a founder member of Stroud W.I., secretary of Stroud village hall, an active member of the Portsmouth Diocesan Council of Social Service, as well as being a governor of the [then] Petersfield County Secondary School.

Although Peter had Oliver Howe to manage his affairs, he still took an active interest in the farm until his death, after a series of strokes, in 2010. One factor in the subsequent decision to move to a business-orientated structure on the farm was its proximity to Petersfield, which persuaded Oliver that such a proposition would be commercially highly lucrative. The dairy buildings were transformed and let out as business units (above), close to the emerging Bedford Road development on the other side of the A3.  More recently, there have been conversions of some farm buildings to lock-up units and storage facilities for rental (above).

In 2018, Peter’s grand-daughter Fiona converted two farm cottages to a day nursery.      These innovations are in keeping with Peter’s old philosophy of change to fit the age: he himself was not only a farmer, but also an engineering innovator and investor in the “cow parlour”. The loss of land in 1992 presented an opportunity for a different future, one that is still evolving today.

Throughout his life, Peter never wanted to do any other job than farming and, despite wartime difficulties and postwar developments which affected his lifestyle, he was clearly a satisfied man. The Stroud community, he felt, had changed considerably: “people used to eat, sleep and breathe the village, farms had their own cottages and people went to work on them in their early teens. Now it is a more mixed, if not middle-class, community”. He enjoyed his retirement with, as he himself put it : “having the best of both worlds: all the beauty of the farm and none of the hard work”.  As one biographer put it: “Peter has not sought the limelight, but has quietly and efficiently undertaken any task which has come his way. Such men are the backbone of our [farming] industry”.