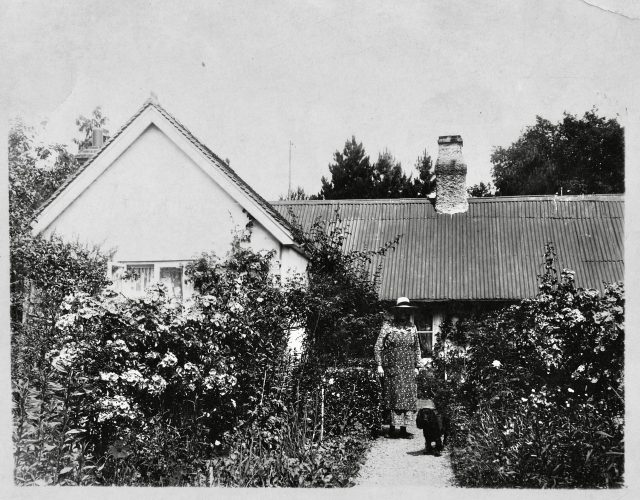 Rose Cottage and Myrtle Cottage are small cottages that would have been built in the C19 for the families of agricultural labourers. It is more than likely that the two original old cottages were probably built by the labourers themselves i.e. Richard Ifold (Ifould) born about 1785 and his elder son James born about 1823. These two cottages were unusual in that they remained in the possession of members of the same family for 150 years or more. It was almost as if, when Richard Ifold (Ifould) came to Steep at the beginning of the nineteenth century, he was ensuring future security for his descendants, in that there would always be somewhere for them to live in the village of Steep.

Other family members may have diversified and moved on over the years, but there were always certain members, who preferred to honour Richard’s original efforts on their behalf, by remaining in the family cottages. This lasted from around the 1850s until just after the millennium of 2000. The original house of the Ifould family had been Rose Cottage. It was followed by the building of the second house just east of it, which was later named Myrtle Cottage. The old dwelling on the Myrtle cottage site was replaced by a newer two storeyed dwelling erected in 1887, proudly displaying a plaque on its south front indicating ‘Myrtle Cottage 1887’. Rose Cottage remained largely unchanged for almost 150 years, until it was finally sold and went out of the Ifould family in the late C20.

Rose Cottage, the present day no. 33 Church Road, Steep and the adjoining house east of it: Myrtle Cottage no. 35 Church Road, are houses that probably stand on the site of possible old squatters’ cottages, that existed on Steep Common before the time of the Steep Enclosures in 1866. The Steep Tithe Map of 1839-41 shows that a broad area named Church Common existed in Steep along the length of what we now know as Church Road and extending into land either side of it.

The present Church Road at that time was no more than a track across this common. This Church Common was in addition to the green area opposite Steep church, which is now known as Steep Common. The principal centres of settlement in Steep village in the first part of the nineteenth century and earlier were at Dunhill, Ashford and Steep Marsh, not the Church Road area. The main buildings on this Church Common area were two small tenement cottages on the site of the house known as Restalls, Steep church and the farmhouse for Church Farm, along with a number of small squatters’ cottages.

Richard Ifold (Ifould) and his wife Elizabeth were married at Steep church in 1815. They had at least seven children. Later censuses show this couple and their descendants living in cottages denoted as ‘On the Common’. The main house for the Ifould family seems to have been that on the site of Rose Cottage. It was originally a small, single storey, thatched, three roomed dwelling. It is not specifically named in censuses until 1901 onwards.

Old maps show a nearby dwelling to the east of Rose Cottage, which was also occupied by Ifould family members from time to time. The present Myrtle Cottage was built in 1887. It would have replaced the earlier small dwelling there.

It seems likely that Richard Ifold (Ifould) born about 1785 perhaps built the original Rose Cottage for himself, his wife Elizabeth and their family. Rose Cottage may have been erected before the 1841 Tithe Map was drawn and Myrtle Cottage between 1841 and the 1857-66 Enclosures. Richard and Elizabeth’s elder son James born about 1823, married Jane Lake of Buriton in 1845. The couple subsequently had at least six children. They are sometimes listed in censuses as living next door to James’s parents. It seems likely that James and his father Richard may well have built the original old cottage on the Myrtle Cottage site too.

Occupants of Rose Cottage and Myrtle Cottage over the years:

Where a residence has just been recorded as ‘Steep Common’, I have looked at the order in which the enumerator has listed the various houses and used my knowledge of the houses in place at the time from maps etc. to make conjecture as to the occupants.

Plot 288 Dwelling on the Rose Cottage site occupied by Richard Highfield (could this have been a miss-transcription of the surname ‘Ifould’?)

Plot 289 east of Rose Cottage was a plot labelled ‘garden’. Its occupant was Stephen Aubery. There was no dwelling on this plot. The garden would have been an allotment garden. Plot 289 would later become the Myrtle Cottage site.

Plot 278 (North west of Rose Cottage plot) There was a dwelling here. It would have been the old Yew Tree Cottage site with adjacent allotment gardens on plot 285 & 286.

1841 Census – living near Ridge Farm at the western end of Steep parish were:

Only two dwellings are listed in this area. They would have been Rose Cottage and the old Yew Tree Cottage near the crossroad/tracks.

It is not clear as to who may have been living there, or whether indeed there was a dwelling on the plot adjacent to Rose Cottage at this time. Only 5 dwellings were listed by the enumerator as between Steep Farm and the Cricketers Inn. (These are most likely to have been: two tenements on the site of the present Restalls, Rose Cottage, The old Yew Tree Cottage, and possibly a dwelling built east of Cricketers inn by Henry Ifould)

The Steep Enclosure Order was made in 1857, negotiations followed over the disposal of the Common land, with the Award finally being made in 1866. Large areas that had previously been common land were enclosed and became the property of landowners. In return Steep villagers were awarded parcels of land that could be used as allotments.

Richard’s son Henry Ifould, who would build the Cricketers Inn in 1859, agreed to purchase plots 59 and 60 as part of the Enclosure negotiations. These were the plots on which Rose Cottage and Myrtle Cottage stood. He agreed to pay £20 to the existing occupants of plot 59 (Rose Cottage) who were his parents Richard and Elizabeth Ifould. They were then permitted to live on the plot until they died. They paid Henry £1 13s 5d rent annually on 25th March (Lady Day).

Plot 60 (Myrtle Cottage) was occupied by Richard’s elder son and Henry’s brother, James and his wife Jane, by the time of the Enclosure Award in 1866. So by the same system, Henry paid James £7 3s 6d. In return, James had to pay Henry an annual rent of 11s 6d. From this we know then, that there was probably an earlier cottage on the site than the present one, which is dated 1867.

1871 Census – Living in the area of Steep Common between the Mill House and Cricketers Inn (Rose Cottage plot):

Parents Richard and Elizabeth had died by this time. Their elder son James and his family had moved into the cottage formerly occupied by his parents.

1871 Census – Living in the area of Steep Common between the Mill House and Cricketers Inn (Myrtle Cottage plot) were:

James Edward, the elder son of James and Jane, and his family had moved into the cottage formerly occupied by his parents.

1881 Census – Living ‘on the Common’ probably on the Rose Cottage plot were the older James born 1823, his wife and their remaining unmarried son John:

Their names have been mis-transcribed as ‘Mould’ in this census:

The younger James b. 1846 and his family had moved on to Bramshott by 1881. It is not clear as to who, if anyone, was living at the Myrtle Cottage plot. A new two storey, four roomed, brick cottage would be built on this plot only a few years later in 1887, replacing the older dwelling. Had the old one perhaps fallen into disrepair?

1891 Census – The Common (perhaps Rose Cottage) living on this plot were:

From this point, Myrtle Cottage was then occupied by Thomas and Jane Marsh for a number of years until 1931.

James and Jane’s son (Thomas) Frank was actually living with his family in Sussex, but seems to have returned with his daughter to visit his parents. Were they perhaps also helping out the older couple who were now becoming advanced in years?

By 1911 James Ifould senior and his wife Jane had both died, making way for his son (Thomas) Frank and family to move back from Sussex live at Rose Cottage.

1919-1931 Electoral Registers continuing to live at Rose Cottage were::

1928 – 1931 Electoral Registers show only one person living at Myrtle Cottage:

A photo taken at this time shows that the roof of Rose Cottage was no longer thatched, but consisted of corrugated metal instead. The thatch may not have existed much beyond the end of the C19.

This is the only instance when one of the cottages does not have family members living in it.

1943 (Thomas) Frank Ifould died. He was buried at Steep church.

At some point after 1944, Fred Ifould (Thomas Frank’s youngest son from his first marriage) came to live at Rose Cottage with his wife Flora.

In the 1970s, possibly after the death of Flora, Fred’s son David and his wife Lynne returned to the local area. At first they lived in Petersfield, then they lived in Steep for 25 years, before moving to Froxfield and then further afield. They did not live at Rose Cottage. They often visited Rose Cottage keeping an eye on his older father.

Fred continued at Rose Cottage after his wife’s death, until it became too difficult for him to cope alone. He then moved to Steep Almshouses and later into a care home.

1990s Rose Cottage was sold. It was much extended by the new occupants who have since moved on.
It now bears little resemblance to the small thatched cottage that it once was.

Earlier, the Marsh and Searle families had become connected when Eliza Edith Marsh married Henry Searle in Petersfield district in 1870.

In the 1950s Herbert and Norah Winscombe lived at Myrtle Cottage

Norah Winscombe (née Searle) had been born in 1917 (Norah Kathleen Searle) in the Petersfield district.

Research shows that Norah Kathleen Searle was possibly the granddaughter of Henry Searle and Eliza Marsh.

Norah Kathleen Searle had married Herbert William Winscombe in 1953 in the Midhurst district.

Villagers who lived in Steep village from 1970s – 2003 remembered the widowed Mrs Winscombe living at Myrtle Cottage. She had a small dog, whom she regularly walked.

Myrtle Cottage at this time was a pretty little cottage, much remarked upon by passers by. It had neat green lawns to the front and a low flint wall separating the garden from the road. Compared with other nearby cottages to its east, Myrtle Cottage was set further back from Church Road. It was immaculately kept.

Sept 2003 Norah Winscombe died aged 86 years. She seems to have had no children.

Myrtle Cottage was inherited by her nephew, a member of the Searle family.

2003 to the present – building works commenced, but then stopped. The flint wall and lawns were removed. Myrtle Cottage has since remained unoccupied.

In the spring of 2021 Myrtle Cottage was sold in a somewhat derelict state. Since then, the new owner has been in the process of restoring and modernising it. Myrtle Cottage now looks considerably different from the original Victorian cottage that it once was. It no longer has its period features although the name plaque and date have been maintained. The works are ongoing.

There is more about the Ifould family here:

If you know more about Rose Cottage and Myrtle Cottage and their past inhabitants, I would be delighted to hear from you through the ‘Contact Us’ section of this website. Please also let me know of errors that may need correcting.

Research by Ruth Whiting into the Steep Enclosures 1857-66

THE SHOPS OF STEEP