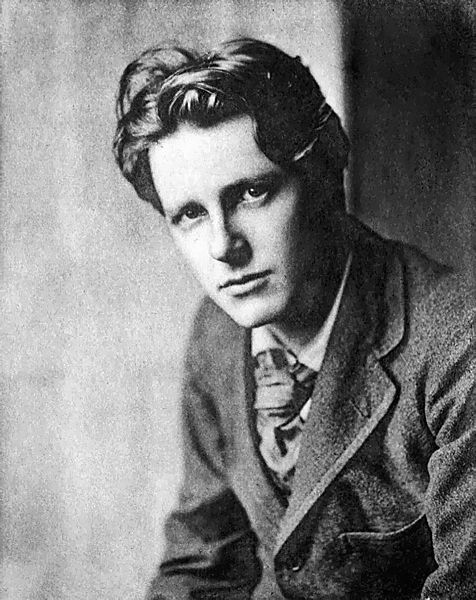 Rupert Brooke was born in 1887; he was good looking and brilliant, winning a Classics scholarship to Cambridge. Today he is well known for certain much quoted lines of his poetry. The centenary of his death was recently observed on 23rdApril 2015. Yet just over one hundred years ago, he was a visitor to this area – to Steep and Froxfield, because he had fallen in love with a girl who was a pupil at Bedales School.

Noel Olivier was the youngest of the four daughters of Sidney Olivier, governor of Jamaica. The family also had a home at Limpsfield in Surrey. Noel had been sent to Bedales, as a boarder, to complete her education. Rupert, aged twenty, met her in May 1908 at a dinner party in Cambridge and immediately observed that she had ‘a friendly grin’. That summer, Noel helped paint scenery for a play that Rupert was directing. In December they also met while skiing in Switzerland. Rupert wrote: “Switzerland is fair. Noel Olivier is superb.”

Between 1909 and 1915, many letters were written between the two. In May 1909, Rupert planned to visit a friend named Jacques Raverat in Froxfield. He hoped to come to Steep, to call at Bedales School and to meet Mr Badley, its founder and headteacher. Rupert earnestly hoped that he could also find the opportunity to meet Noel again and wrote to her of his plans. In her reply, she appeared very much the modern independent woman. She was not prepared to drop all her school commitments just for the sake of going for a walk with him: “If you come on Wednesday, I shall have to make a fuss with various orthorities and renounce cricket. And you aren’t worth that……My mind refuses to think clearly to order, I’m afraid.” (sic)

Noel did go on to develop a great regard for and friendship with Rupert. By the summer of 1910, the pair camped under canvas with other young people at Penshurst and swam in the river. Bunny Garnett, who organised the trip, wrote: “Soon we were sitting round the blazing fire, Noel’s eyes shining welcome for the new arrivals and the soft river water trickling from her hair down her bare shoulders…..The moon rose full ….We crawled back into our sleeping bags and slept, but Rupert, I believe, lay awake composing poetry.”

When Rupert’s book of poetry was later published, he sent Noel a copy. The correspondence continued, with Rupert infatuated by Noel. Yet she was not at all sure that she wanted to marry and settle to domestic bliss. Hence she wrote to Rupert: “And I came to think any one (sic) liking me very much was not doing the best thing & that marriage (all that business – children) was a poor thing to wait for and look forward to. And my mood consists in hating the idea of it & feeling that you & your life are far more important when separated from it, and mine ought to be etc.”

By the summer of 1911, Noel had left school and after some travelling, enrolled at the Royal Free Hospital to study medicine. Devastated, Rupert fled to Germany in an effort to forget her; it was from here that he looked back to England and wrote his well known poem ‘The Old Vicarage, Grantchester’, which ends:

Say, is there Beauty yet to find?

And Certainty? and Quiet kind?

Deep meadows yet, for to forget

Yet Stands the Church clock at ten to three?

And is there honey still for tea?

Rupert later travelled further in North America and shortly after the outbreak of World War One in 1914 wrote his other much quoted poem, ‘The Soldier’. Patriotic as he was, Rupert obtained a commission in the Royal Naval Division and in 1915, was sent with The Hood Battalion by ship to Greece. On the journey, he succumbed to heatstroke and sustained a mosquito bite which became septic. On 23rd April 1915 he died, aged 28 years and was buried on the island of Skyros. After his death, his poem ‘The Soldier’ became the inspiration for many who joined up and fought in World War I.

Noel, meanwhile, grieved at the news of his death but continued her studies. Despite her spelling difficulties, she qualified as a doctor, married a colleague in 1919, had five children, became a well known paediatrician and eventually died in Sussex in 1969, aged 77 years.

One might speculate that the following lines from Rupert Brooke’s poem ‘The Soldier’ may reflect some of his memories of Steep and the countryside near Petersfield.

And think, this heart all evil shed away,

A pulse in the eternal mind, no less

Gives somewhere back the thoughts by England given;

Her sights and sounds; dreams happy as her day;

And laughter, learnt of friends; and gentleness

In hearts at peace, under an English heaven.

Rupert Brooke’s sentiments may today seem old fashioned to many, but for those of us who enjoy the beauties of our local countryside, perhaps they still resonate with a semblance of the same feeling.

Information for this article was taken from a book entitled:

“Song of Love – The Letters of Rupert Brooke and Noel Olivier” by Pippa Harris, published 1991. Photograph of Noel courtesy of Noel Olivier Estate. A version of this article originally appeared in the Steep and Stroud Village Newsletter in 2003.