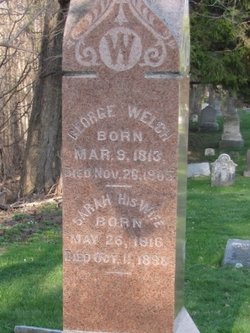 The member of the Ifould family who emigrated to America

Sarah was the eldest of Richard and Elizabeth Ifold/Ifould’s six children and the sister of Henry Ifould the innkeeper. She had been born in Steep on 26th May 1816, just over a year after her parents had married at Steep church on 6th April 1815. Her father had been the first of the Ifould family to come to the village of Steep in East Hampshire. It is a rural village that nestles at the foot of the wooded beech hangers, or hills, in the south of England and now part of the South Downs National Park. Richard had been baptised in the village of Mapledurwell, near Basingstoke in 1785, so may well have been born around that time. Richard Ifould’s parents were James Ifould, baptised in 1755 and Dinah née Crasswell born about 1753. Sarah’s mother Elizabeth came from Hawkley, another nearby village to Steep and also amongst the hills.

Sarah was born in Steep and baptised at Steep church on 16th June 1816. Her father was an agricultural labourer. Sarah was probably born in a cottage near to Ridge Farm in Steep. This may have been the Ifould family cottage which her father built on ‘The Common’ in Steep, which later became known as Rose Cottage, or it may have been another cottage nearer to Ridge Farm. There was no school in Steep when Sarah was a child, so unless she was taught rudiments at home, she may not have been able to read or write. When she grew up, Sarah worked as a servant.

At the age of 21, Sarah married labourer George Welch who was of the same age. The marriage was at Steep church on 18th October 1837. It is known from the 1841 Tithe Listing of Steep that George’s father, William Welch, also occupied a cottage and allotment garden on the common in Steep near to the location of Ridge Farm.

The Ridge Farm buildings, as shown on the 1841 Tithe map of Steep, are not those that we know today. The old Ridge Farm and its buildings were situated at the eastern end of what is now Ridge Common Lane and on the northern side. At that time, Ridge Common Lane did not exist. It was merely a track across the common land in that part of Steep. William Welch’s cottage was in the same area as these old Ridge Farm buildings. As near neighbours and fellow villagers, it seems likely that the Ifould and Welch families would have known each other well.

After their marriage, Sarah and George may have briefly lived in the nearby small market town of Petersfield, for their eldest son George was born there around the beginning of 1838. He was baptised on 28th January 1838. They then moved to Froxfield, another neighbouring village just north of Steep. They first lived near Hungary Lodge. By 1851 George had stepped up a little. He was no longer a labourer, but a small ‘farmer of 18 acres’. They were in the Barnett area of Froxfield, not far from Mill House. The Barnett and Barnet Side areas of Froxfield are still clearly identifiable on today’s maps. They lie south of the C18 road and of the well-known ‘Pub with No Name’. By 1851, seven children had been born: George in 1838, Gilbert 1840, Emily 1842, Lucy 1844, Jane 1846, Ellen 1848 and William 1850. Their eldest son thirteen year old George was working as a bricklayer’s labourer. Gilbert, Emily and Lucy were at school. But George and Sarah were ambitious. Being a small farmer of only 18 acres was not enough, they wanted more.

In the summer of 1852, the Welch family sailed with their seven children to America. George and Sarah were in their mid-thirties. For a family who, in England, had probably never travelled out of the county of Hampshire and who probably rarely went beyond the local market town of Petersfield, this was a tremendously ambitious step to take. George could not read or write; Sarah may not have been able to either. One wonders how they might have coped with the paperwork required by emigration. And they had seven children in tow. They were to depart from the port of Southampton. How would they have made their way to Southampton? There was no railway line through Petersfield at that time. However, a line running from Nine Elms in London through Winchester to Southampton Docks had opened in 1840. Did they travel nineteen miles by coach or cart to Winchester with all their belongings and the seven children, and then take the train from there? Or did they go the entire thirty miles to Southampton by cart or coach? Whichever way, it would have taken far longer than by today’s means of transport.

It must truly have been the beginning of a very big adventure for all the family, and especially for the children. The wider Ifould family seems to have been a close one, so farewells must have been tinged with great sadness. Family and friends would know it was unlikely they would ever see George and Sarah, or their children again. They could not write letters home, neither could those at home probably read them.

The Welch family booked to travel on a ship named the ‘Agnes’. It is not known whether it was a steam ship, which were comparatively new at that time, or a sailing vessel. A journey across the Atlantic would take about two weeks by steam, or six long weeks by sail. Most emigrants to America travelled as steerage passengers. They were required to take their own bedding and cooking utensils. They slept, ate and socialised in the same spaces. There was little opportunity to go on deck for fresh air. Basic dried food supplies were provided, but passengers had to cook these for themselves in a small cramped shared kitchen. The ‘Agnes’ eventually arrived in New York on 25th August 1852.

For early American settlers like the Welch family, they would have arrived at one of the many wharves at the port of New York. At the period when they arrived, America operated an open door policy. No passports or visas were required. As time went on immigrants found themselves prey to deceptive employers and unscrupulous money changers as they attempted to secure work and lodgings. From 1855 therefore, a more formal process was set up for dealing with those entering the country through New York, first in 1855 at Castle Garden and from 1892 at Ellis Island. In 1852, the Welch family however seem to have coped alone in finding work and somewhere to live. They remained in New York state and ended up in a community where there may already have been a number of other British emigrants.

The family settled near a small town called DeWitt in the Onondaga county of New York state. Their postal area was the hamlet of Collamer, formerly known as ‘Britton Settlement’. It was in the north east part of DeWitt. Compared to the rolling hills of the South Downs and the wooded hangers with which they were familiar in England, this new land must have seemed very flat. George and Sarah stuck at it and perhaps relished the challenge. By the time of the 1860 U.S. census, they were in their forties. George was classed as a ‘day labourer’; the total value of his land and belongings had amounted to $500. This was considerably more than he might have accrued back in England. Five more children had been born to the family after they settled in the U.S.A.: Elizabeth in 1853, Harry 1854, Sarah 1856, Nellie 1859, and Harriet 1860.

Perhaps feeling that he wanted a life other than farming, George and Sarah’s second son Gilbert, who had been born in Froxfield in 1840, enlisted on 8th August 1862 at Syracuse as a private in the New York Infantry. Five months later, he caught typhoid fever and died aged 22 years on 15th January 1863 at Falmouth, Virginia. He was buried initially at Robinson’s Farm, Virginia, but was later interred in the National Cemetery, Fredericksburg. Many years later, when his younger brother William died in 1933, Gilbert was remembered by his family back in Collamer. An inscription in memory of Gilbert was included on the memorial stone to William in Collamer cemetery. Until this point, all seemed to have been going so well in their new country. Gilbert’s death at such a young age, when he was away from them, must have been a blow to the family.

By 1870, Gilbert and William’s father, George Welch, was no longer a labourer, but listed as a ‘farmer’ with land valued at $1200 and a personal estate of $100. The census recorded that he could not read or write. Sarah was ‘Keeping Home’. And by the time that George and Sarah were in their sixties in 1880, all but two of their daughters were married. So, over the years, their farm and family thrived and they seem to have been very content living near Collamer.

After giving birth to twelve children and having made a great success of travelling to the New World with her husband and family, Sarah Welch, née Ifould, eventually died on 11th October 1898 aged 82 years. She was buried at Collamer cemetery. Following her death, George went to live with his married daughter Emily Badgley and her husband Jacob, also a farmer. Living in a house nearby was Emily and Jacob’s 28 year old son William, with his wife and daughter. He was George and Sarah’s grandson, and he was a veterinary surgeon. George Welch died on 26th November 1905 aged 92 years. He was buried with Sarah at Collamer cemetery.

In common with other American settlers of the mid nineteenth century, George and Sarah left behind a tiny rural village in England. They showed tremendous determination by making the arduous journey with their children, to a new life far away in the large and unknown country of the U.S.A. Their children survived to adulthood and married. George and Sarah must have worked extremely hard to achieve the success that they did. They also had the satisfaction of seeing their children and grandchildren receive a sound education and achieve professional careers. Their bold move had paid off. The success which they achieved for themselves and their family was probably considerably more than anything they could have dreamt of or attained in England. Many years before, Sarah’s father Richard Ifould had boldly left his home village and set off to make a new and successful life in Steep. In supporting her husband in their great emigration adventure, Sarah too had shown the same Ifould family spirit of courage and determination, but this time on a much larger scale.

If you are connected with the Ifould family of Steep, have more information about them, or would like to correct any errors in the above account, I would be glad to hear from you. See the ‘Contact Us’ section.

The two small cottages in Steep in which various members of the Ifould family lived between around 1840 and 2003 were Rose Cottage and Myrtle Cottage in Church Road. There is more about them here:

There is more about members of the Ifould family here:

Baptism and Marriage Registers of All Saint’s church, Steep

Family history research from descendants of the Ifould family

History of sail and steam ships crossing the Atlantic

The London and Southampton Railway

The Railway in East Hampshire