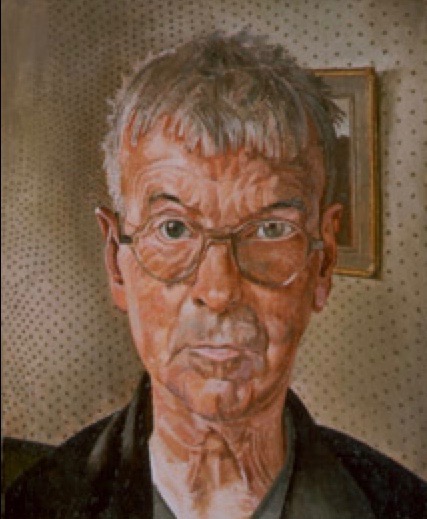 Not many people know that the artist Stanley Spencer spent a short time living in the village of Steep and that he almost painted murals for Steep Village Hall and for Bedales School.

Born in Cookham, Berkshire, in 1891, Stanley grew to be just 5 feet 2 inches tall, but was very much an individual, showing artistic prowess from a young age. After a period at the Slade School of Art, Stanley saw service in WWI. In 1915 he joined the Royal Army Medical Corps and initially was posted to Beaufort Hospital Bristol before being sent to Macedonia. The sights he met during the war filled his head with images, many of which later appeared in his art. On his return to Cookham in 1919, Stanley found it difficult to paint after his experiences.

He spent time painting in a boat house belonging to the Slessors at Bourne End, near Cookham and then Stanley was invited by the war artist Muirhead Bone to stay in Steep. Muirhead Bone was an artist himself, but he also acted as an agent in commissioning work and encouraging young artists. In Steep, Bone lived at the junction of Ashford Lane and Island Farm Lane, Steep, in a house named Byways, which still exists today. Stanley was offered the sum of £120 to teach Muirhead Bone’s son Stephen to paint. He was also offered £250 to paint murals at the newly completed Steep Village Memorial Hall. There was the possibility of a further commission for work at Bedales School. Stanley duly arrived in July 1921 and stayed with Muirhead Bone’s family until December. While there, Stanley produced three drawings of music classes taking place in the Lupton Hall at Bedales, intended as part of a decorative scheme for the school. Stanley was intensely inquisitive, and he also enjoyed talking at length about himself and his ideas. As a result, he may perhaps have become a little wearying as a house guest. Matters came to a head in the Bone household when Stanley spotted on the hall table, a post card addressed to the Bone family. He couldn’t resist having a look at it and found that the card was from artist Francis Dodd inviting the Bones to visit Oxford and asking them to bring Stanley with them. Perhaps it was the last of a string of incidents, as Mrs Bone was not pleased by Stanley’s inquisitiveness, accusing him of pilfering her mail. Stanley was thus asked to leave the Bone household. He was horrified by the prospect of supporting himself, but duly found lodgings elsewhere in Steep, with a Mrs New.

The 1911 census lists Walter New and his wife Elizabeth as living at Blenheim House, in what is now Church Road. This house is almost opposite Steep Village Hall, where Stanley had been promised a commission. If Mrs New was still living at this same house in 1921, it would seem a convenient place for Stanley to lodge while he undertook the Village Hall painting. During his time in Steep he worked on another painting entitled ‘The Unveiling of Cookham War Memorial’. In a letter, he punned, “I am still steeped in the war memorial picture.” He also produced a Crucifixion painting, which would have formed part of a group at Steep Village Hall. Perhaps the money offered was not considered sufficient for a series of paintings in the Steep Hall. Sadly, both this and the Bedales scheme came to nothing after the falling out with the Bone family.

Stanley eventually left Steep and moved to Petersfield, first to live with local artist Flora Twort in her house above a bookshop, then to 19 The High Street (in 2019 it was Ask restaurant) and then to 25 The Square. By the end of 1922 he seems to have left the area, yet he had liked the atmosphere of the town and in 1926, did a painting entitled ‘The Poultry Market’ based on that at Petersfield.

Later Stanley was commissioned by Louis and Mary Behrend to paint the magnificent murals at the Sandham Memorial Chapel at Burghclere, Berkshire, a memorial to Mary’s brother, Lt. Henry Willoughby Sandham, who had died after the end of WWI, so could not be included on their war memorial. For the Sandham murals, he used ideas he had worked on for the Steep Hall. It is these for which Stanley is often most well known. He went on to produce a number of paintings both religious and secular, including a series on ship building on the Clyde. He died in 1959. Many find his work inspirational. Yet for those of us who remain in Steep, we can but wonder what if our village hall had also become the recipient of his murals too…..

Information here obtained from a Petersfield Museum talk given in 2014 by Chrissie Rosenthal, custodian of the Spencer Gallery, Cookham.