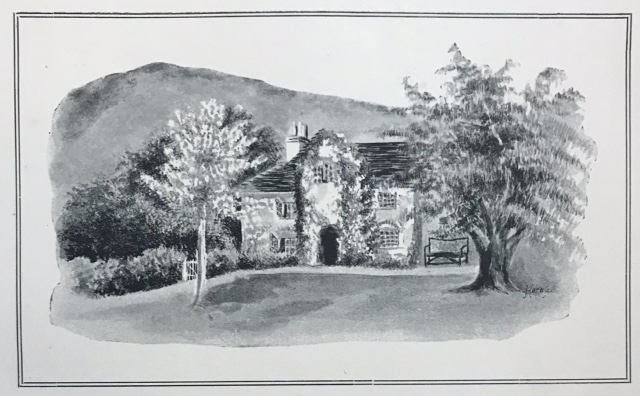 Mention had been found in Steep church registers of a “Steep Children’s Home” – several children from this home were baptised at Steep church in the late nineteenth century. Further research produced a picture of the home with the following description.

“…. a pretty little stone built house…..for the last thirteen years tenanted by Miss C. Norris, who has during these years devoted her life to the education and training of little children who would otherwise have been denied this. Almost hidden by the hills and beechwoods, it might be unknown to the outside world except for the good work that year by year goes on, quietly but surely helping both the minds and bodies of the children, who are always happy to come and sorry to leave…..”

The home existed at least between 1880 and 1898. The 1891 census lists eight young girls between the ages of three and eleven years living there, all of whom had come from Portsmouth. Amongst other entries, the Steep registers record that Amy Lockyer aged 2½years, whose unmarried mother was dead, was baptised at Steep church in December 1888 and lived at Steep Children’s Home. The lady in charge was Miss Charlotte Norris who had been born at Corpus Christi College, Oxford; it is likely that she was related to James Norris, Doctor of Divinity, who was the President of Corpus Christi between 1843 – 72 and described as a ‘good old President – one of the kindliest of beings’.

The Steep Children’s Home building is now better known as a private house named ‘Berryfield’.  At the time it was used as a children’s home, the house was owned by the Hawker family. The Hawker family lived at the nearby Ashford Lodge. William Hawker became the first vicar of Steep, when it became a parish in its own right in 1868. Before that, Steep had been part of the parish of East Meon. William Hawker’s father Edward was a retired Admiral. There were also other family connections with the Navy. It may be that the Children’s Home venture had been set up by the Hawker family, as it was for the benefit of orphaned girls who came from the naval port of Portsmouth. It is perhaps likely that it was a scheme of Eugenia Hawker, the widow of William Hawker. She seems to have been one of those ‘gentry’ women of the time, who quietly went about the village doing good, supporting this venture as well as the creation of the Victorian village school and Steep almshouses.

The house is in the Ashford area of Steep and was also a former residence of the poet Edward Thomas.