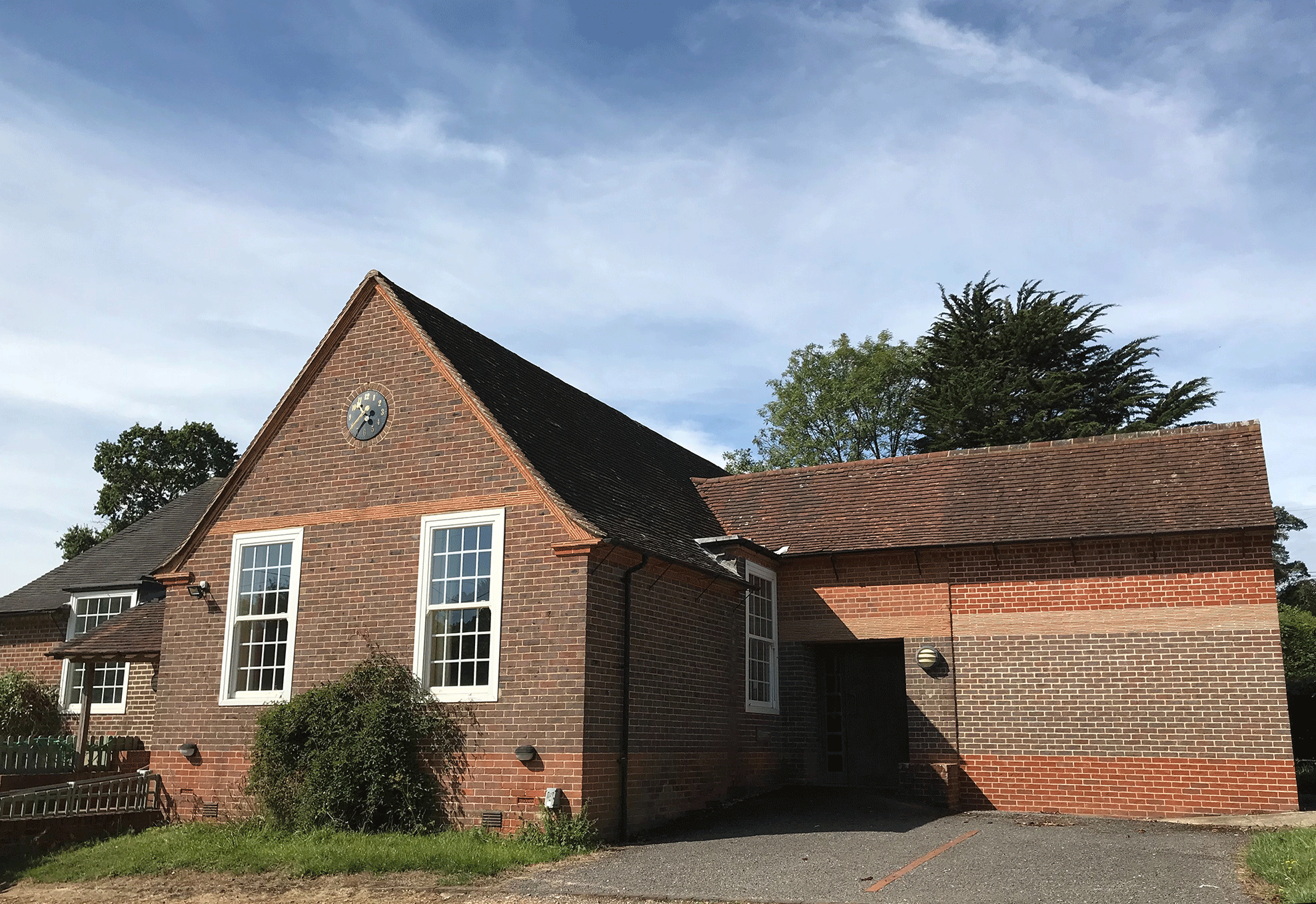 A History of Steep War Memorial Village Hall and Club

There had previously been a Steep Village Club before WWI. It was started by Captain Bourchier. The club met at the house now numbered 45 Church Road. It is almost opposite the Steep Hall.

The following account was compiled by Rollo Wicksteed who was chairman of Steep Parish Council and a Village Hall trustee for a number of years:

The Steep War Memorial Village Club was established in 1920 by a transfer of land in December 1920 from Bedales School to the Trustees. In 1921 it was agreed that the Club was “To provide a centre for all social activities and for all forms of physical and mental recreation and for educational purposes.” The architects drew up the plans in March 1920. The club was to be known as the Steep War Memorial Village Club.

The hall was altered in 1924 when the present south wing was built replacing the original kitchen. The Club balance sheet for the year ending Sept. 1922 shows a payment to Mr L.G. Pearson for architects fees of £64 5s 0d and one to Mr H.J. Cribb of £3 10s 6d for designing and cutting the inscription on the building. The balance sheet for 1923/1924 shows that a building fund had been established (presumably for the extension) and totally £96 16s 2d.

In 1921 a payment of £1957 1s 7d was made to the builder Messrs Kemp and Sons and £136 1s 10d was due to the architect. Money that year was received from a host of subscribers notably the Gimson family, and one guinea from Walter de la Mare. A large contribution of £108 was made by Muirhead Bone, artist, one of the trustees, who lived at Byways, Steep. He later became Sir Muirhead Bone (1876-1953). He was known for his drypoint work and pencil and charcoal drawings. He had been a war artist in WWI and would go on to perform the same task in WWII.

In 1922 Bedales School conveyed a further piece of land to the east of the club for the erection of a war memorial. (Note from Fran Box – Whether this meant an actual monument or whether it referred to the War Memorial Hall is unclear.) By this time several of the original trustees had left Steep. The Badley sisters were living in the Lake District, the former vicar Herbert Peto Betts was in Menton, France. George Woodman Esq. was in Columbo, Ceylon and Muirhead Bone was in London. 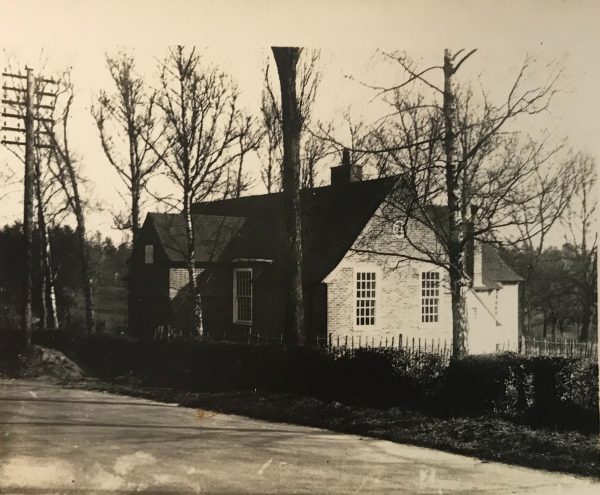 In 1936 owing to financial difficulties, The Village Hall Trust obtained permission from the Charity Commission to transfer the operation of the Hall to the Parish Council (who have managed it ever since) including the financial responsibility for its upkeep, “these being a charge to the parish rates”.

Among the early club rules is one that limits members to buy no more than two pints of beer a night plus an extra pint for the purpose of “treating a guest”.

The first Club chairman was Oswald B. Powell.

In Nov 1927 a wireless licence was granted to Horace Shipton Brown on behalf of the Club to allow the premises to be used as “a wireless receiving station”.

A party to the 1920 conveyance was George Bransby Williams. It is not known if this is the famous man or a relative.

The 1920 Indenture conveying the Village Hall land can be seen at Hampshire Record Office.

The conveyance was between Mary Emeline Badley, Laura Elizabeth Badley spinsters of Winterseeds, Grasmere, Westmorland, John Haden Badley of Bedales School and Amy Badley his wife – these are referred to as ‘The Company’. They were those persons who owned the land belonging to Bedales School.

And the following who were to be ‘The Trustees’:

May Fitton, widow of Island Steep

The land was conveyed for the sum of £50 for the purpose of a war memorial. I have presumed that the war memorial in question was to be the Steep War Memorial Village Hall which was to be erected on the land.

The indenture is signed by The Badley sisters, John Haden Badley and his wife Amy.

Interestingly, Amy Badley’s signature was witnessed by her maid Annie Oakley, who would later go on to become landlady of the Harrow Inn after she married Arthur Millington Dodd.

The representatives of ‘The Company’ i.e. Bedales School who also signed were directors:

We know that Muirhead Bone gave £108 towards the project. It is likely that some of the other trustees may also have given substantial sums. George Woodman’s brother Charles had died in 1915 In WWI. May Fitton’s husband Brig. Gen. Hugh Fitton had died in 1916 In WWI. Both of these names are on the Steep War Memorial. It is thus perhaps likely that Woodman and May Fitton may have made donations to the Hall in memory of their relatives. In 1875, the Shuttleworth family had donated a large sum for the stained glass window at the western end of Steep church. They may well have given to the Hall, especially as Algernon had served in the army. Louisa Lomas was a wealthy spinster who lived at Oakhurst and regularly gave money to good causes. She donated to and organised a collection for the funeral expenses of her former employee William Appleby, whose name is also on the Steep memorial. She may also have organised the headstones at Steep churchyard of Appleby and William Reed, another war casualty. The headstones are identical. William Walters may perhaps have been another donor to the Village Hall fund.

Steep Village Hall contains a Roll of Service Board. This gives the names of all those from the village who served in WWI, as well as those who died. A full list of the names can be seen here: Names of those from Steep who returned from WWI and Steep War Memorial Village Hall

Lord Beaverbrook promoted the idea in Canada of war memorials in the form of Halls of Remembrance hung with large canvases. Muirhead Bone was also keen that there should be a National Hall of Remembrance in which the war artists paintings would be hung. His idea failed but Bone was still keen to promote the idea locally – hence the Steep Hall. Bone also invited the artist Stanley Spencer to come to Steep and work on ideas for paintings for the Steep hall. Spencer came to Steep and stayed with the Bone family at their home, Byways in 1921. The full story of this may be read in the article on Stanley Spencer in the ‘People’ section of this website here: Stanley Spencer and Steep

It was thus that Muirhead Bone recommended his architect friend Pearson for the Steep Hall. Pearson also worked on the Sandham Memorial Chapel at Burghclere in 1926-7. It was at Burghclere that Stanley Spencer would finally realise his paintings, using ideas that may have started in Steep.

In 1965 land behind Steep Village Hall was sold to Beryl Marguerite Low for the building of a bungalow there, in which she lived until her death in 1997. A section on Beryl Low will be added to the ‘People’ section of this website in due course.

Steep Village Hall underwent a refurbishment in preparation for the millennium. A bequest from actor Alec Guinness, who lived in Steep until his death in 2000, helped to fund this. The Hall was given a new kitchen, the stage was removed and film projection equipment, for the benefit of the Steep Film Club was fitted.

A small extension by architect Ken Claxton was built on the north side of the hall for the storage of chairs etc used by the Film Club.