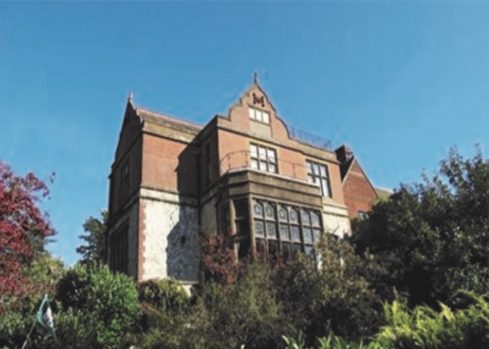 Artist Keeley Halswelle was living in London in 1880 when he placed an advertisement in The Hampshire Telegraph of 3rd April 1880 stating:

The Victoria County History of Hampshire Vol 3 states that Stoner House was built by Keeley Halswelle. Other sources state that Halswelle purchased Stoner House for £3,300 in 1880 and thus came to live for periods in Steep.

Stoner House and Lodge had been designed by the prominent architect R. W.Edis (1839-1927), who also designed additions to Sandringham. Occupants living at Stoner House in 2020 report that Edis built the house for himself in 1870 and that this information came from a descendant of the Halswelle family. Edis was employed in Steep to oversee the alterations and improvements that were made to the church in 1875-6. In Kelly’s Directory of 1870-9, Edis is listed as a resident of both Steep and of Fitzroy Square, London.  It may well have been that Halswelle purchased Stoner House from Edis following the newspaper advertisement he placed. A Western Daily Press account of 21st August 1908 states that Halswelle altered the house to create one large room capable of holding his curios and possessions. This may have been the creation of his studio.

Sir Robert W. Edis (1839-1927) had been born in Huntingdonshire and articled to London architects William Gilbee Habershon and Edward Habershon. He was admitted to the A.R.I.B.A. in 1862 and became a fellow in 1867. Edis’s early designs were Gothic, but he later moved more towards the Queen Anne style in the 1870s and 1880s. The designs were often in brick and terracotta with Dutch gables. Later he became interested in the Aesthetic Movement of decorative arts and furniture design. He wrote two books on this in the 1880s. He designed mostly private houses and public buildings, but also a few churches too. Stoner House perhaps displays some of Edis’s earlier Gothic style as well as having elements of the later Aesthetic movement.

Edis was also a military man having been commissioned in the Artists Rifles in 1860. He went on to become the regiment’s Commanding Officer in 1883 and their honorary Colonel in 1909 until his death in 1927 aged 88 years.

There is local speculation (2020) that the nearby Victorian Stonerwood Park house, now demolished, may also have been designed by Edis, also perhaps the Old Vicarage, Steep. Both have/had a similar appearance to Stoner house and were in Edis’s early Gothic style.

More can be found on Keeley Halswelle in the article on him in the ‘People’ section of this website. https://historyofsteep.co.uk/portfolio/artist-keeley-halswelle-and-stoner-house-steep/ While at Stoner House, Keeley Halswelle became a Ruling Councillor of the local habitation of the Primrose League, a national organisation that had been set up in 1883 to promote Conservative party principles. It was so called because the primrose was said to be the favourite flower of Benjamin Disraeli.

Keeley Halswelle died unexpectedly of pneumonia in Paris in 1891. He was 58 years old. The Halswelle family retained Stoner House, but do not always seem to have lived there.

Scratched into the lead of one of the windows at No. 3 Stoner House is the following inscription:

The battle of Colenso in Natal on 15th Dec 1899 was a major defeat for the British in the Second Boer War. Internet sources state British casualties to have been: 143 killed, 755 wounded, 240 missing. Of the Boer forces there were 8 killed and 30 wounded. Gordon Halswelle, elder son of Keeley was in the army and took part in the Boer War as well as WWI. It is not known whether Halswelle took part in the battle of Colenso. It seems that he felt the need to record the terrible loss of life and injury incurred.

You can also read about Wyndham Halswelle, the younger son of Keeley and his wife Helen: https://historyofsteep.co.uk/portfolio/wyndham-halswelle/

The 1901 Census shows that William Black, an East India merchant, and his family were in residence at Stoner House.

Helen Halswelle, Keeley’s widow, finally left Stoner House at some point after 1911. Laura Lady Airedale seems to have been the next notable occupant. She had been married to the First Baron Airedale: Sir James Kitson, a Liberal politician in 1881. He had died in 1911.

In the 1920s the widowed Laura Lady Airedale continued to occupy Stoner House.  At this time a local council officer visited the house in order to make an assessment of its rateable value for local taxation purposes. The notebook of his comments about the properties he visited is in the Hampshire Record Office collection. His remarks on Stoner House were:

A pretty house standing on the hillside commanding lovely views of the downs. Beautiful grounds sloping to the south with nicely made asphalt paths. The rooms are not very striking and they might have been better planned.

Quite a lettable place.

Only one cottage (Lodge). Chauffeur lives in Petersfield.

The Honourable Olive Kitson was the daughter of Laura, Lady Airedale. She lived at Stoner House with her mother. She was married at Steep church in 1926 to Major Harold Kingsley. The couple supported social occasions in Steep village, as well as local young people’s groups such as Scouts. It is thought the Kingsleys probably also lived at Stoner House. Lady Airedale died in 1939. The Kingsleys do not seem to have lived in Steep after 1951.

Stoner House was occupied by two bachelors in the 1960s.

Eventually the house was sold again and in 1988 it was converted to three dwellings. A year or two later three additional houses were built in the grounds. There are now six houses on the seven acre site.

The 2020 Residents of Stoner House report that the gardens once had fine topiary and water on different levels. The gardens are on the Hampshire Gardens Trust list, recorded as a late C19 small park, but no research has yet discovered their details.

Book: Buildings, Gardens and Monuments in Steep by Struthers, Box, Routh and Storey 2018

Information provided by James and Antonia Lawday of Stoner House 2020