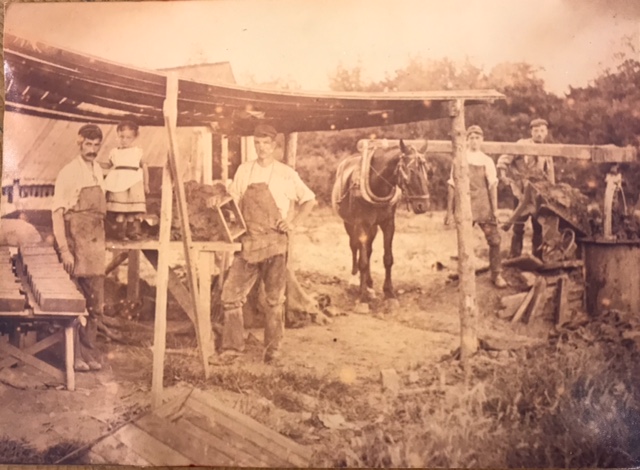 Tucked away down a track on the left as one rounds the final corner in Steep Marsh and heads up past Coldhayes to the hangers is the site of the old Brickworks. They were built around 1890 on a site that had a ready supply of suitable clay, and indeed one of the claypits is still there in the form of a large pond.   The illustration shows men at work, with bricks on the left and a man holding the mould in the centre. (The little girl by the way was the grandmother of Graham Rowden, who lives just yards away).

Rollo Wicksteed remembers roaming the area as a boy and seeing the brickworks and the little railway that ran through Taylor’s Copse out to the road. However, by the nineteen fifties such a small enterprise became uneconomic, and the works were demolished in 1960 to make way for four long poultry houses. Then came years of intensive poultry rearing, which didn’t come to an end until 1990.

Those four long sheds are still there today, but now divided into eighteen light industrial units, and the span of activity there is quite broad. The ice cream you buy in the Folly Market and local pubs is made there. Another small firm makes pickles and chutneys, and yet another makes cheese. Add to that a carpet business, two carpenters, a blacksmith, two antique restorers, two agricultural enterprises and a lift company and you can see that sleepy Steep Marsh makes quite a contribution to the local economy.

Incidentally, the very thriving charity Canine Partners started life in the brickyard. This was in 1990, when three dogs were brought in to be trained to provide assistance to disabled people. Today there are over 750 partnerships, so we can say that here is another way in which Steep Marsh has made its mark.

A LITTLE HISTORY OF THE STEEP AND OTHER BRICKYARDS, AND THEIR WORKERS

David Dobson’s article features the Brickyard of Steep Marsh, with information about its history as well as what happens there today. But who were the people who worked there in the past?

The 1891 Census, taken on 5thApril of that year, lists two brickmakers: Godfrey Breach, aged 58 years and Thomas Norgate 32 years. Both were living with their families at cottages nearby in Steep Marsh. In addition, two others living at Railway Cottages in the Burntash area, listed themselves as bricklayer’s labourers. They were Frederick Pledger 59 years and Robert Hounsome 69 years. Whether this meant they were employed at the brickyard or on building sites elsewhere is unknown. However, given its close proximity, it seems likely that they may well have worked at the Steep Marsh brickyard.

Ten years later the information provided in 1901 Census seems to indicate that the Steep brickyard business had expanded. There was now a foreman brickmaker: 54 year old Edward Butler, and three other brickmakers: John Hobbs 29 years, Frederick West 43 years and Harry Gisborne 41 years. There were also three brickyard or bricklayer’s labourers: Alfred Ryder 16 years, Thomas Frost 34 years and Frank Passingham 24 years. Two of the brickmakers lived at cottages in Steep Marsh and one at Kettlebrook. The labourers lived at Railway Cottages and Tanyard Cottages. The number of brickyard workers had increased from four to seven workers, indicating a greater production of bricks. At around this time, a large number of houses were being constructed in Petersfield and the surrounding areas. It seems likely that production was increased to meet the additional demand for bricks.

Another ten years after this, the 1911 census revealed four brickmakers, all living at cottages in Steep Marsh. They were the Edward Butler 28 years, son of the 1901 foreman brickmaker, Frederick West, 53 years, continued to work there. John Coombs 64 years and George Carpenter 60 years had joined him. William Trigg, 46 years, of Burnt Ash Cottage was bricklayer and labourer. Did the fact that two fewer workers were now employed, perhaps indicate that the demand for bricks was beginning to decline?

The clay soil found in our area was perfect for the making of bricks, hence the creation of local brickyards. There was a large brickworks at the Causeway in Petersfield and one on the Winchester Road at Stroud. Both of these seem to have been larger than the Steep brickyard. A source states that the Steep brickyard may also have supplied bricks to the London Brick Company.

The brickworks at Stroud began around 1870 and was owned by the Gammon family. The bricks produced there were stamped with the label ‘Stroud ‘, some of which still survive. Cottages in North Stroud Lane were occupied by the workers of the Stroud brickworks. According to Petersfield Museum, the Causeway brickworks ceased production in 1937. The Stroud works also wound up in the late 1930s.

A 1946 drawing shows the Steep brickworks as somewhat derelict, so work in Steep may also have stopped at around the same time. Increased mechanisation of the production of bricks had made such small works unviable. It has been revealing to uncover information about the past industrial heritage of Steep. If you are related to any the Steep or Stroud brickyard workers, or have other information on this subject, we would be pleased to hear from you. franboxsteep@yahoo.co.uk