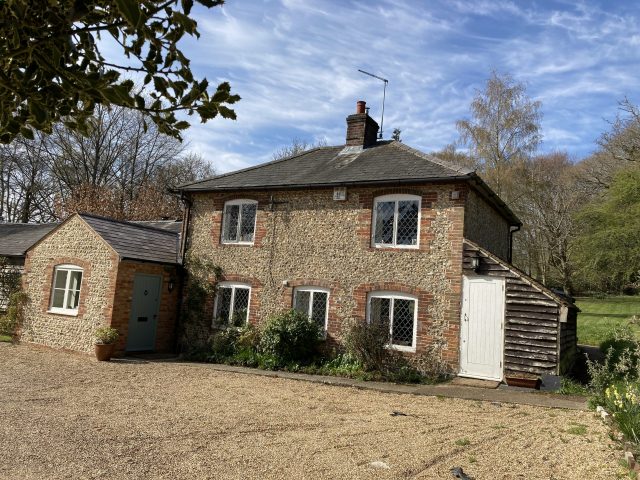 At the age of about 28, in 1891, Alfred was living with his widowed father, brother and two sisters at South Street, Chailey, near Lewes. He was working as a gardener. Not far away near Uckfield in Sussex, Martha was working as a cook to the family of Rev. Harry Harbord. She lived with them at The Rectory in East Hoathly. The family employed five other servants. One wonders whether Alfred and Martha met because he was perhaps working as a gardener at the Rectory, or perhaps at another large house nearby. They married in 1892 back in Martha’s home parish in Oxfordshire, but they returned to live in Sussex where their son Charles was born the following year.

Perhaps Alfred looked around for another job which could better support his new young family, for some time between 1893 and 1895, they came to live in Steep with their young son Charles. By 1901 the Cottingham family were living at ‘The Gardeners House’ in Sandsbury Lane, in the Dunhill area of Steep and Alfred continued to work as a gardener. It still exists, though has since been extended. It is a weatherboarded house with a tiled roof. It is now known as Oakley Cottage.

It is likely that Alfred was probably the gardener for Dunannie House and possibly for Collyers House too (a large house and estate nearby), both of which were owned by the Shuttleworth family.

Dunannie was used as a kind of dower house for the larger Collyers House and its estate. After her husband had died and their children had left home, the widowed Rose Isabella Shuttleworth, the matriarch of the family, tended to live at Dunannie House.

Dunannie was a house dating from Regency times, probably originally a farmhouse. It was demolished in 1972 and several other houses were built on the site. The Gardener’s House lay just beyond it on the left in the small, unmarked Sandsbury Lane.

Collyers House had been built for the Shuttleworth family in 1882. By the time of the early twentieth century, the family tended not live there, as their children had dispersed. The large house was mostly let out to others.

From 1898, possibly earlier, retired army officer Major Adam Bogle and his wife Ethel often came to spend periods in Steep, first at Steephurst and then at Collyers House. They rented such large houses. Ethel Bogle’s sister Blanche was married to barrister Henry Pownall. From around 1899, the Pownalls owned the Chailey estate in Sussex. Alfred Cottingham had been born in Chailey, so there may be a connection there.

Perhaps Alfred come from Sussex to be the gardener at Collyers and Dunannie because of the Bogles being the tenants there? Perhaps Alfred was recommended by Ethel’s sister Blanche?

After they moved to Steep, Alfred and Martha had seven more children, so their family eventually consisted of the following:

·       Ethel Rose b. 2.2.1909 Steep (Baptised later at Steep church, she initially had a private baptism at home, indicating that, as a baby, she was small or not expected to survive.)

Alfred gave his occupation as ‘gardener’ at each of the children’s baptisms. Baby Gladys Mary died at the beginning of 1902 when she was only a few months old.

Charles, Florence, Mabel, George, Sydney and Violet all attended Steep Victorian school. It took children from the ages of 5 – 14 years. The school still exists, but is now just a primary school. It is opposite Steep church. Young Violet only attended Steep School briefly from 28th Feb to 29th Sept 1910. Her reason for leaving was noted in the school admissions book: ‘family left the parish’

Major Adam Bogle, the tenant of Collyers, was keen on sports. He was one of the Vice Presidents of Steep Cricket Club for several years in the late 1890s. The club had been formed in 1893. Perhaps because of Major Bogle’s influence, Charles Cottingham was keen on cricket too. He grew to be six feet tall. Charles was on the committee of the club and captained the second XI – so he must have been a good player.

In his youth, Adam Bogle had the distinction of playing in the first FA Cup Final ever. It was in 1872. Unfortunately, he was on the losing side. The story of this is on our History of Steep website.

Charles Cottingham was also a choir boy at Steep church. One wonders if any of his brothers were too. Remembering that Martha Cottingham had worked in the house of a clergyman before her marriage, she may have had strong religious principles and encouraged the family to attend church and take part in its activities. The Steep schoolmaster was also influential in persuading schoolboys with good voices to be part of the church choir. In those days too, there was the added incentive that choir boys were also paid a small amount for their services.

After possibly 14-16 years in Steep, the Cottingham family left in 1909 and went to Micheldever north east of Winchester. They were living there when the 1911 census was taken. Alfred continued to be a gardener. Why did the family leave Steep?

The 1911 census shows that Collyers House was only occupied by the servants, so the Bogles had left. They had gone abroad to the Canary Islands, possibly because Adam Bogle’s health was not good. They later returned to Collyers; the Major died there in 1915 aged 66 years.

Dunannie House does not appear in the 1911 census, showing that it too was perhaps closed up with no-one living there. Mrs Shuttleworth had moved to London and was living at Lennox Gardens in Chelsea with four servants. She would however later move back to Collyers and died there in 1924.

As well as for tending grounds and growing flowers and plants, gardeners were needed perhaps even more for the growing of food, fruit and vegetables for consumption by the families of the big houses and their guests. With no-one living in either of these Steep houses for a time from 1909 onwards, such food was not required. Alfred skills were thus probably no longer needed. It looks therefore as if the Cottingham family were forced to leave Steep because there was no longer a job for Alfred. The gentry families had left the two big houses and the services of several gardeners were not required.

But one member of the Cottingham family remained behind in Steep: Charles. He became a garden boy at another big house in Steep: Ashford Lodge. In 1911, he was aged 18 and boarding at the house of William Crewe and his family. William was the head gardener for Ashford Lodge. And later Charles’s sister Mabel seems to have returned to work for the Shuttleworth family again at Collyers House. She was living there in 1924 when she was married at Steep church. On 1st November 1924 Mabel Eunice Cottingham aged 27 married William James Pinnock 27, labourer, of Langrish, at Steep church. Her father Alfred gave his occupation as ‘gardener’ at the time of the wedding. The couple do not seem to have lived in Steep after their wedding.

Charles Cottingham’s name is significant in that it is listed on the Steep War memorial and read aloud each Remembrance Sunday. A few months after the outbreak of WWI, Charles left his gardening job in Steep and enlisted at Southampton in the Royal Garrison Artillery. By June 1916, he had arrived in France and by early September of the following year, he was appointed Acting Bombardier. A few days later, his unit was in position at the ‘Moated Grange’ in the Neuve Chapelle sector. A bomb was dropped by an enemy aircraft on their position. Charles received multiple wounds to his back, arms and legs. Two other comrades were wounded and another killed. Charles was taken to No. 11 Casualty Clearing Station. He died a few days later on 14th September 1917 aged 24 years. Charles was buried at Godeswaerwelde British cemetery, France.

The fact that Charles remained in Steep village after the rest of the family left and that Mabel returned, seems to show that the Cottingham family perhaps enjoyed their time in Steep village and with the people for whom they worked. As with many working class men, Alfred had been forced to leave Steep and seek work elsewhere, taking his family with him.

Algernon, elder son of the Shuttleworth family later returned to live at Dunannie House. He served on Steep Parish Council for a number of years. His second wife Elsie took part in charitable duties in the village. A gardener was again needed at Dunannie and a certain William Oakley moved with his family into the gardener’s cottage, renaming it Oakley Cottage. The Oakley family would also become well known in Steep, but that is another story.

Registers of All Saints’ church. Steep

Local knowledge of the Dunhill area of Steep from Hugh Routh and Rollo Wicksteed, members of Steep History Group

Free French in Steep in WWII