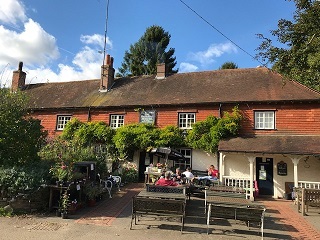 William Whiteman’s notes on the Harrow Inn are as follows:

The Harrow:   In the 19th century the Steep Vestry met there.  Its triangular island site is thought to be that of a cattle pen mentioned in 10th century land charters.  Externally the building is 18th and 19th century, but older construction is embodied.  It was probably an inn well before the 1744 mention in the Steep rates list.  From 1744 to 1865 it was in the hands of the Parr family and the related Parsons family.  When Robert Parsons died in 1865, his widow Marian renounced all benefit under the will, perhaps because it restricted re-marriage.  In 1868-80 it belonged to Robert Crafts, of the Red Lion and the Dolphin, who in retirement at Liss was classified as ‘Gentleman”.  He sold it to Lukers, and it followed the familiar transfer to Strongs and Whitbreads.

The Harrow is mentioned in Petersfield Papers No.3 – ‘The Inns of Petersfield’, p.35 by William Whiteman

Licensees of The Harrow

It is possible to compile a list of Harrow licensees from censuses and other documents:

The Register of Licences held at Hampshire Record office lists the following owners and licensees for the Harrow Inn:

1911 Census – Caroline Hall 62 yrs b. 1849 Steep, married, Trade Public House Keeper.  (Her husband Albert Hall 64 yrs  lived at the Harrow with her, but listed himself as ‘domestic gardener’)

Spring 1921 – Samuel Penn. His wife Louisa was there with him.

Clinton Brown of Stroud (2019) related the following regarding Sam Penn:

Samuel Penn was a veteran of WWI. Clinton referred to him as ‘Uncle Sam’. Sam was possibly Clinton’s great uncle. Clinton reports that Sam had been gassed during WWI and because of resultant problems with his lungs could not take on a job involving heavy work. It was for this reason that he became the licensee of the Harrow. It is thought that George Knight of Stroud, another relative, helped him acquire the licence. Clinton also related that Sam had a small dog which he had brought back from WWI with him. The dog was always at the pub. Regulars liked to see it when they went there.

3rd August 1932 Arthur Millington Dodd became licensee and was there in that role with his wife Annie May (neé Oakley) from that date.

Arthur Dodd & two children outside the Harrow 1930s. Picture from the Harrow collection

1958 Annie May Dodd became Harrow licensee on the death of her husband Arthur.

‘The Inns of Petersfield’ Petersfield Papers No.3 by William Whiteman

The Harrow, the Most Unspoilt Country Pub from Tales from the Country Pub by Brian Martin