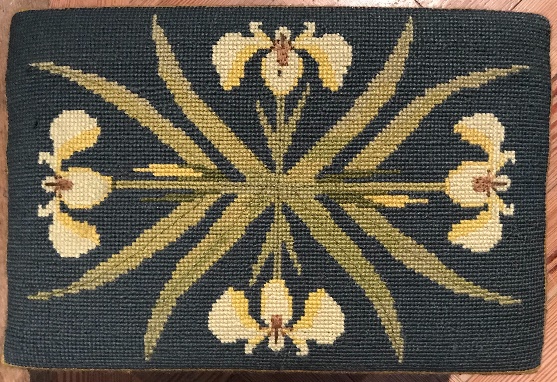 This article is taken from the PowerPoint presentation on the Kneelers of Steep church given to the Steep History Group in February 2019.

The kneelers of Steep church feature in the book, “Embroidered Church Kneelers” by Barbara Thomson and Wendy Trewin:

Gardeners rush to eradicate lawn weeds as soon as they dare to appear. At Steep in Hampshire, Canon Douglas Snelgar decided to commemorate them on the kneelers….so sprigs of dandelion and daisy are at the centre of two of the150 kneelers he designed. As none is alike, the variety is astonishing and yet there is a symmetry about the project as a whole. The emphasis is on design not on pictorial effect. The treatment of, say, oak leaves and acorns, or sprays of holly or mistletoe, seems made for the purpose. Four bullfinches fly with their wing tips touching and beaks facing inwards: spotted toadstools form a pattern; bats, butterflies, blackberries, apple blossom, ferns, rabbits, hedgehogs, trout, primroses – all these and many more, stand out on dark or light blue backgrounds framed by a thin yellow border. A splendid game bird graces one kneeler. ‘It doesn’t really belong to Steep, but when it fell into the vicarage garden, although it soon flew away, I felt it should be included,’ Canon Snelgar explained. …….he knows the flora and fauna brought to the village as the seasons come and go.

There are/were about 150 kneelers. They include:

How did they come about? When were they made?

In 1967 the kneelers in the church were a mixed bunch covered in either rexine or cloth of varying sizes. A meeting was held at the Vicarage. About a dozen ladies attended. The Vicar produced some designs. Mrs. B. Harcourt-Powell agreed to take charge of the materials, issuing them as required. (Bettina Harcourt-Powell lived at Venables at Steep Marsh in 1979.)

The first kneelers were of a variety of subjects:

It was then decided that the rest of the kneelers should represent the natural history of the area.  No more miscellaneous subjects were produced. Kneelers made 1967 – 1980.

What was going on at Steep church when the decision to create the kneelers was made?

1961 Faculty for: Installation of new north porch doors Extension of porch light Formation of a chapel at east end of north aisle

1967 The decision to create the kneelers was made

Dec 1968 Centenary: 100 years since All Saints’ became a parish in its own right.

Dec 1968 Centenary: 100 years since All Saints’ became a parish in its own right.

1969 Faculty applied for to cover the following:

1969 New lectern made by Hugh Routh

THE DESIGNERS OF THE KNEELERS:

THE BACKGROUND COLOURS OF THE KNEELERS:

HOW WERE THE DESIGNS DONE?

They were drawn on graph paper 10 squares to the inch. This corresponded to the double thread canvas of 10 stitches to the inch. The vicar Canon Douglas Snelgar did most of the drawings and designs.

By 1976, nearly ten years after the project started, 60 kneelers had been produced. Average of 6 – 7 kneelers per year produced Mrs Harcourt-Powell was ill & could not continue. Anne Winscom took over the organisation.

Double thread canvas of 10 stitches to the inch was used. Appleton’s crewel wool was used, 3 strands at a time. Each colour shade of the wool had a unique number:

This made for a co-ordinated whole in both quality and colour shades. The use of the above materials produced a particularly fine design/picture, which is unique to the Steep kneelers. Other churches have similar embroidered kneelers, but the results are often more crude, with thicker wool and perhaps a different gauge of canvas used.

Meticulous records were kept. Anne Winscom’s folder in the church archives cupboard has several pages recording the numbers of the wools used and where they were kept.

The tops (the face with the pictures) were worked in cross stitch. The sides were a variety of stitches of the makers’ choice:

Some makers added their initials & date on the side.

In the later 1970s an announcement was printed in the Steep newsletter each month: The kneeler working party would be meeting on the first Thursday of the month at a particular house (often Oakley Cottage – that of Marianne Routh, or at the vicarage). Those who wished, brought the kneelers on which they were working, chatting to each other as they sewed. The Kneeler Working Parties became a significant social group within the village of Steep. When all the kneelers had been completed, ladies continued to meet in their groups over tea or coffee, for companionship and conversation for many years to follow. HOW were the designs of the kneelers allocated to the makers? Carol Glover remembered that makers would attend a kneeler working party. A large pile of designs would be brought to the party by Anne Winscom. Those who had volunteered to sew were able to choose from the drawings which kneeler they wished to make. They then took the design, canvas and wools home and began to make a kneeler. At the time. Diana Parker was based in Singapore with husband, Blake, R.N. When their son returned in the holidays from his UK boarding school, the kneeler design and materials were sent with him to Singapore. Diana opened the package & an ivy leaf fell out. She was to sew the ‘Ivy’ design L33. The leaf had been included by Douglas to ensure authenticity in the sewn design.

THE MAKING UP OF THE KNEELERS

The foam for the insides came from a shop in Portsmouth. Wooden bases were supplied by a local carpenter. The first kneeler had been made up by an upholsterer, but it was expensive. Douglas Snelgar studied what had been done & then made up the rest himself. (At the time, he was vicar of Steep only. Froxfield & Privett were then a separate parish.) Later in the 1980s, it was decided to add buttons/feet to each kneeler in order to stop wear when the material rubbed against the floor. Brian Keys remembers this happening. BY WHOM WERE THEY MADE? Ann Winscom seems to have been one of the driving forces behind the creation of the Steep kneelers 1976 – 80. A number of the ladies who embroidered them were her neighbours, friends or relatives or attended Stroud church. The makers did not all come from Steep & Stroud. Some came from Petersfield, Emsworth, Liphook & further afield. Many of the people who designed or made the kneelers have now died. (Feb. 2019)

Ann Winscom sewed 13 kneelers herself & helped with others.

He was the eldest of 3 sons of Mr & Mrs J T Snelgar. 1917 Born in Catford, East London. On leaving school he worked with deprived people at the East London Mission and had aimed to join the probation service. He loved acting. He had always loved to draw and paint but had no formal art training. He did a BA History degree. He worked very briefly for an interior design company who made Parker Knoll chairs. He was a conscientious objector at the onset of WWII and was sent to work on a farm in Buckinghamshire. After the London Blitz of 1940, he joined the Royal Naval Volunteer Reserve (London) as an ordinary seaman. He was soon sent for officer training and became Sub Lieutenant. WWII service 1943 – 1946

In 1943 he took it from South Africa, up the east coast of Africa and through the Red Sea, for service in the eastern Mediterranean He also saw service on HDML boat 1023. In HDML boats like these, Douglas took part in secret operations. It is believed they were involved in landing and taking off troops/commandos and others from the island of Crete and possibly other nearby locations. Douglas was awarded the DSC for this service. After WWII Douglas went to Trinity Hall, Cambridge. He gained an M.A. in theology. He then trained for the priesthood at Westcott House Cambridge. Ordained in 1950, he was a curate St Peter and St Paul, Fareham 1951-3 and then curate at Holy Trinity, Ventnor, Isle of Wight 1953 onwards. April 1955 he married Pamela Anne Roberts at the church of St Peter and St Paul, Fareham. She was the daughter of Portsmouth diocesan Archdeacon Edward Roberts at the time. He later became Bishop of Ely. 1957 Douglas Snelgar became vicar of Steep After 35 years in Steep he retired to Harting in 1992. He died in 2008 & is buried in Steep churchyard.

Other main makers and designers of the kneelers:

Mrs Cicely Alder, 1901-1993. She lived at Hillside, Harrow Lane with husband Leonard, an Admiralty scientist. Was passionate about crafts, creativity, needlework. She is buried at Petersfield cemetery

Other workers of the kneelers:

The design drawings and designers

But before any of the kneelers could be worked, a pattern drawing was required to show where the stitches for the design would go. These were done on graph paper corresponding to the gauge of the tapestry canvas used. These drawings on graph paper, with pale pencil colouring are still in the possession of the Snelgar/Burnell family.

Douglas Snelgar designed 115 kneelers, so would have produced working pattern drawings for all of these.

One came from a Mary Queen of Scots design.

How was the making of the kneelers funded?

A number of people paid for their own materials. Old newspapers were collected & sold. Originally it had been estimated that each kneeler would cost £3 to make. This rose as years progressed.

Where were the Kneelers made?

Many were made locally in Steep and Stroud. Others by people who lived in Petersfield. Kneelers were also worked in:

Many end panels are plain cross stitch. Some makers took particular pains to make sure that the side panels also were decorative.

Those with a Bedales connection who made kneelers:

And who were all the others who made the kneelers?

The ones about whom we know nothing & are seeking information:

We are trying to collect photographs of all those who made the Steep kneelers. So far, we only have the following pictures.

If you have a photograph of someone who made a kneeler, please send it in to us, so that we can add it to our Steep History archive collection. franboxsteep@yahoo.co.uk

As of February 2019, the following kneelers are missing.

The pictures below are copies of old photographs of the missing items.

Information on Canon Douglas Snelgar from:

Information on the people who worked on the kneelers from:

Information on the process of creating the kneelers from:

With thanks to the John Owen, vicar of All Saints’ Steep and to its PCC for permitting access to the kneelers and to the church archives.