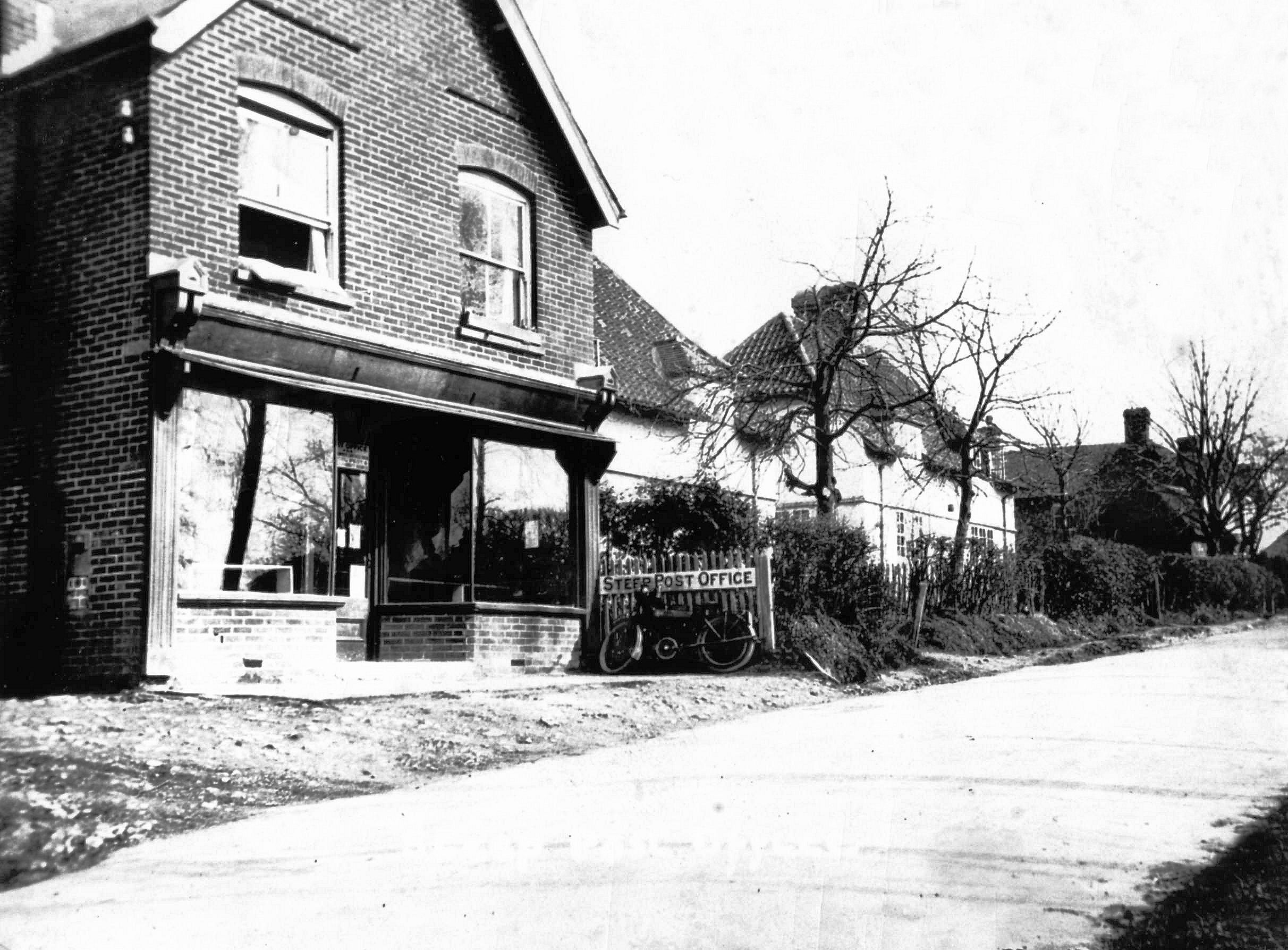 There has not been a shop in Steep for a good number of years, but a number of shops once existed in the village at various points and times.

Next to the Cricketers Inn, at number 3 Church Road (formerly Malva) there was a general store kept by Mrs Green. At least one person in Steep remembered climbing the flight of steps which led to its entrance and buying sweets for a penny. Two houses further along Church Road at Pembridge Villa (the present number 9) was a dairy owned by Frank Clark. His daughter, Louie Warwick, remembered churning butter there. She also did a ‘milk round’ by bicycle to local houses. Milk was carried in a large can, with pint and half pint dippers hung on the handlebars. Milk was thus dispensed to the jugs of householders.

The Steep Village Stores and Post Office was at 15 Church Road, now a house named ‘The Old Post Office’. This shop closed in 1990s. In the 1950s, this Village Stores operated a flourishing local grocery delivery service. It was possible to leave a list of one’s weekly grocery order at the shop, which would be made up and later delivered to your house. Behind this shop at one time, there was a bakery known to have been operating in 1886 and possibly later. It was run first by a Mr Richards and then by a Mr Luff.

At the turn of the century, there was an earlier Village Post Office at 37 Church Road (1 Woodfield Cottages), which must also have been some kind of shop. Brackets for a shop awning can still be seen on the front wall of this house. There have been tales of a butcher’s shop opposite the Cricketers and next to the smithy, but it is possible that the butchering of the animals was done elsewhere. The Smithy was on the site of the present Owens Cycles shop. Tommy Moss, worked there with his father. See separate article about Steep Garage for pictures of him. He was well known as an excellent farrier and blacksmith. The smithy closed in 1968 to be replaced by Steep Garage, whose architectural design was commended by the Prince of Wales. When this also closed, it became the present bike shop. There are records of a working smithy in Steep in 1821, but it is unclear as to whether this was at the same site, or possibly at Dunhill.

Downgate Cottage in Steep Marsh was a general store at one time, also selling greengrocery and paraffin. One person who grew up in the 1920s remembered being banned from buying sweets there because of alleged cock fights in the garden. In the eighteenth century there was also a barber who worked locally.

Some of this information has been taken from an article written in 1977 by Beryl Low for the Steep Newsletter; it is also from oral records of Steep villagers.