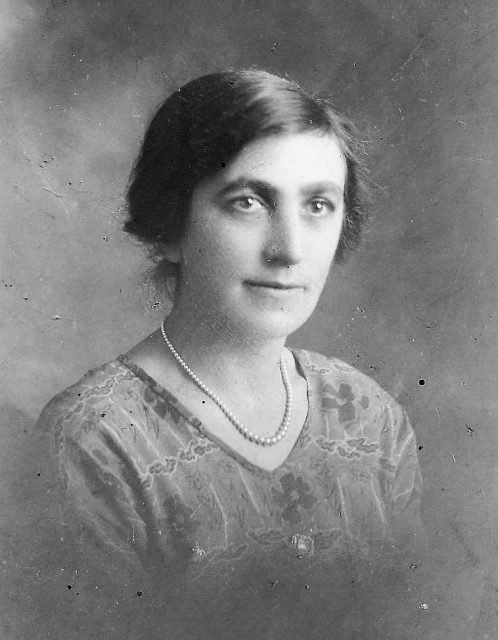 This account of the Waters family has been written by Janet Goddard, who is a descendant of both the Waters and Bridger families of Steep:

A few years ago I inherited some items from my mother (Elisabeth Bridger) but had no idea how they came to be in her possession of who they originally belonged to.  After a little research I found they belonged to Mabel Luff nee Waters, who was a godmother to my mother.

There was a painting of Steep Mill, a small photo album with photos belonging to Mabel and a silver sugar shaker with the name Leonard Luff engraved on it.

Mabel’s father was Walter William Waters who originally came from Bishops Waltham but moved to Steep Mill when he was 21 years old.  Before this he had attended the Grammar School in Alresford.

When he moved to Steep Mill, Walter was lodging with Frederick Dancey, the Miller at the time, and Walter was a Farm Manager of 180 acres according to the 1881 Census.

Walter married Fanny Louise French from New Farm, Alresford in the spring of 1887 and the couple lived at Steep Mill after their marriage.  Two years later in June 1889 their only daughter Mabel was born at the Mill and baptised at All Saints’ Church.

Walter, Fanny and Mabel continued living at Steep Mill and by the time of the1891 census Walter’s occupation is the Miller and other members of Fanny’s family are also living with them at the Mill.  In Kelly’s Directory dated 1898 Walter is registered as a Corn Merchant and Miller but we know that Steep Mill is demolished sometime after this date.

By the time of the next census in 1901 the family have moved to Dunhill Farm in the village.  Walter is now a farmer and Corn Merchant, Fanny and Mabel are with him on the night of the census as well as Mabel’s cousin Ellen Bridger whose family are living at Venables in Steep Marsh.

There are other members of Fanny’s family living in the village at this time too.  Her father Charles French and sisters Ada, Florence and Rosa are all living at Ashford Cottage.

Mabel Waters grew up in the village and spent most of her life living in Steep, but sadly in 1908 when Mabel is only 18 years old her mother Fanny passes away, she was buried at Steep Church.

The first World War must have affected Walter and Mabel, two of her Bridger cousins Charles (my grandfather) and Henry went off to war but luckily both came back. There were also numerous cousins from the Waters side of the family that joined up during WW1 so it must have been a worrying time for them all.

In November 1914 Mabel is mentioned in an article in the Hampshire Telegraph under the heading ‘Travelling Dairy School’.  The article states ‘Mabel Waters acted as local secretary, and was most successful in obtaining pupils for two full classes.

The dairy van tours the county of Hants to teach butter and cheese making, and at the same time they encourage young people to adopt newer and better methods’.

After WW1 Walter was also one of the original trustees who helped to organise the building of Steep War Memorial Village Hall which was built around 1920.

Walter continues as a Corn Merchant and in a Directory from 1927 it states that his business is in Penns Road, Petersfield.  Walter and daughter Mabel move to Stonerdale, a house in Church Road, Steep in 1929 but sadly 3 years later Walter dies suddenly at home.

His funeral was described as ‘A Large Assemblance’ in the Hampshire Telegraph and amongst the mourners were many members of the Waters, Bridger and French Families.  There were also many other members of the local community that attend the funeral and over 45 floral tributes were sent.

The newspaper article also mentions that Walter was a member of Petersfield Bowling Club and Secretary of the Petersfield Autumn Show.

After her father’s death Mabel continues living at Stonerdale in Steep and goes on to marry Leonard John Luff in 1934 at Steep Church. Mabel is 44 years old when they marry and Leonard is 52.

Leonard is related to Neville Luff who is married to Mabel’s cousin Eleanor Bridger.  Leonard is also distantly related to Horace and Sarah Luff who are running the Post Office in Steep in 1939.

Living with Mabel and Leonard at the time of the 1939 register is an 18 year oldstudent called Leslie Duffield who could have been an evacuee. Leonard is also an ARP Warden at Bedales and the register states he is a retired Milk Salesman.

Leonard Luff becomes a member of the Steep Platoon of the Home Guard during WW2 and was awarded a silver sugar shaker after the war with the inscription C.Q.M.S. Leonard Luff, from O.C. Steep Platoon, Home Guard, 1940-1944.

Leonard sadly dies in 1952 age 70 and at sometime after his death Mabel moves to Hope Cottage in Chapel Street in Petersfield where she lives for the rest of her life until she passes away in 1965. Mabel and Leonard are both buried in Steep Churchyard.