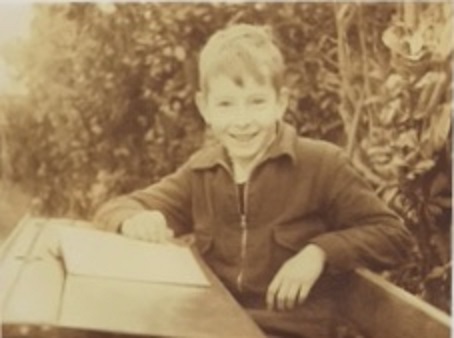 I was happy growing up in Steep. I don’t remember the hardship of the war and immediate post-war. We had chickens and pigs and we could always eat an egg. However, I do remember that one night I was grabbed and thrown under my mother’s bed for protection during an air raid.

I thoroughly enjoyed the village school in Steep, which always seemed very cold. Each boy made his own bow and arrow and they were hung around the classroom – these were serious weapons! And we became very accurate with them. One winter we made a slide down the hill using the school hose, but the police came and told us off.

We went to Petersfield for shopping twice a week. When I was about fourteen I was sent to Petersfield Secondary School. It was a shock and I was very shy. I didn’t get on with sports at all, but I loved anything to do with literature and I had several texts published in the school magazine.

We spent a lot of time outdoors. Once we had a bicycle the whole county was ours. As teenagers we also took the train to Hayling Island. The cinema was always popular. I joined the boy scouts and going to camp in Harlech in Wales was just amazing!

There were dances in the town hall. I liked jazz music and there were occasional fights with rockers, usually when a boy was looking at another boy’s girlfriend. The Harrow pub was another popular hangout. On Sunday afternoons we wore a jacket and a tie to go to Petersfield coffee and tea shops.

I enjoyed London for the museums and theatres but I couldn’t imagine living there. Nor do I wish I had owned a computer or mobile phone when I was young.

The above account by Tony Upton, born 1941, formed part of a display at Petersfield Museum in June 2015 entitled ‘Being Young in Petersfield’, with thanks to the museum.