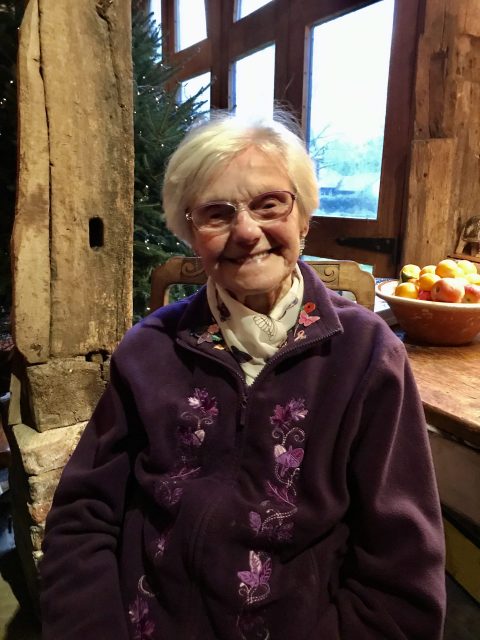 The following article by David Dobson appeared in the Steep and Stroud Newsletter for December 2018. David, the editor, had interviewed Vera Elliott about her memories of Steep. Vera had just become 93 years old.

On 25 October the Welcome Club gave a party for Vera Elliott’s 93rd birthday, and Vera told me about it.

“I used to go to the old Welcome Club in the eighties and I was very glad when they started it up again. As for my party, it was terrific!”

“My husband David and I came to Steep in 1960, to work at Bedales for Miss Chater, who was our boss.  David was a qualified chef, having served in the Merchant Navy, and did the cooking with two others. As for me, I was responsible for the cleaning of four dormitories and two classrooms, as well as serving at meals. I really loved the work. The children were always friendly, though some of them took liberties.  David Linley was one – he always asked for double helpings of ice cream. I remember him well because he went missing on the day he arrived and caused quite a stir – he was eventually found in Gateways in Petersfield, together with two other boys. His parents, Princess Margaret and My Armstrong -Jones, came down quite a lot – actually it was mainly him.”

“I also remember Tommy Steele coming down with his daughter – sadly, she didn’t settle, and left after one term.”

“I worked at Bedales for twenty years. During that time, we lived in various school cottages, but we had put our name down for a council flat, and when we left the school (my husband had retired a year earlier) we moved here to Hays Cottages.  I didn’t retire though; I had eight cleaning jobs after that and enjoyed them all. I can’t remember the names now – just Beryl Low and Mrs Whiteman.”

“Here in my flat I feel very secure, with nice neighbours. I am grateful for the twice weekly bus service to Petersfield, which enables me to get out and about. I live alone of course – David died in 1991 – and though we had no children we had a very happy marriage. He is buried in the churchyard and I go there a lot – I often see Richard and Janet Smith busying about. No, I am not a churchgoer, but I love the churchyard.”