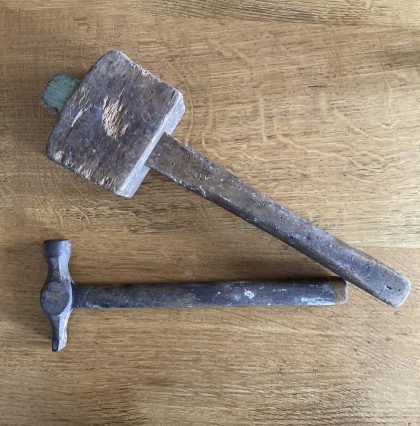 His father was Henry Ifould born 1825, son of Richard Ifold. Henry was the builder of the Cricketers Inn, Steep.

His mother was Caroline Luckins/Luckens, Possibly born abt. 1826. She was his father Henry’s first wife.

The 1841 Census lists a ‘Carolin Luckin’ 15 working as a female servant in the household of Bay(?) Challen 45 yeoman of Brook House, Cocking, Midhurst district of Sussex. Given that a daughter Charlotte was born six years after this census in the Midhurst district, this ‘Carolin’ may well have been her mother. If this is the case, then Caroline Luckins may have been born around 1826.

It is perhaps more than likely that Henry Ifould/Ifold was her father, although the couple did not marry until a few weeks after her birth. She seems always to have been known as Charlotte Luckins, rather than Ifould.

Caroline was a resident of Steep and of full age at the time of the marriage.

Henry was a resident of Petersfield, of full age, and a labourer.

(Not to be confused with William Ifould born (fourth quarter) 1849 at Steep in the Petersfield district, who was the son of Henry Ifould’s brother, James Ifould born 1823 and his wife Jane.)

William Henry aged 2, was living at the Spain Petersfield in the house of (wood) turner Richard Pullen. His older sister, Charlotte 3, was also with him. The two sons of Richard Pullen were also living there. One was a cabinet maker. The other was a turner. This seems to indicate that this was a wood working business, perhaps producing furniture.

1855 Second Marriage of His Father

His father remarried in the third quarter of 1855. to labourers daughter Esther Bettsworth. Five children would be born 1859-1867 to this marriage. William Henry Ifould born 1849, the son from his father’s first marriage, does not ever seemed to have lived with the new family.

William Ifould aged 12 born Petersfield 1849 was a scholar and boarding at Churchers College in Petersfield.

His surname was mis-transcribed as ‘Yould’ in the census record.

William Ifould aged 22 years born Petersfield, was a boarder and journeyman carpenter in the household of George Clinker 51, Carpenter and wheelwright employing two men. Also there was his son James Clinker 18 carpenter.

It seems that as well as being a scholar at Churchers College, William Henry had also learned the woodworking skills of the Pullen family business and was now furthering them as a journeyman seventeen miles away in South Hayling.

Fanny Maria Cave had been born at Lee in Kent, the daughter of William and Sarah Cave. Her father had been a grocer and cheesemonger of Lee Green.

In 1871 Fanny had been living with her 64 year old widowed mother, grocer, at 3 Burnt Ash Place, Lee Green, in the Christ Church parish of Lee, London and Kent.

After their marriage, William and Fanny seem to have travelled to Romania and spent some years there, where William Henry may have learned engineering skills.

1875 Birth of their son Alexander Ifould in Jassy in Romania.

There is no record for William Henry and Fanny in the 1891 census, indicating that they may have been in Romania at this time.

It is believed that Henry and Fanny were in Jassy, Romania, for at least some of the time between 1872 and 1900. Their son was born there around 1875.

Jassy, or Iaşi, is the second largest city of Romania. It is in the historical region of Moldavia. It had long been a leading centre of social, cultural, academic, and artistic life. It is home to the oldest Romanian university and to the first engineering school. Until 1859 Jassy was the capital of Moldavia. In 1862 the principalities of Moldavia and Wallachia combined to form the new country of Romania, whose capital became Bucharest.

Henry and Fanny were therefore present in this new period of Romania’s history. The presence of an engineering school at the university is significant, given that Henry seems to have acquired engineering skills while he was there. Perhaps he studied there and then applied his engineering skills in the many opportunities that emerged in the newly formed country.

Given the important social, cultural, academic, and artistic life of the city, it must have been a vibrant and interesting place in which to live and work. It has a humid, continental type climate. One of the nicknames of the city was The City of Ideas. It is not surprising that Henry grasped the opportunity to travel there with his new wife. One can also see why the couple may have remained there for a number of years and why later, his son Alexander returned there in 1920s.

Romania is a central European country which borders the Black Sea. It lies east of Hungary and shares borders with Ukraine, Moldova, Bulgaria and Serbia. Iaşi is in the north east of the country. Travelling to Romania in the nineteenth century would probably have involved a journey of well over a thousand miles by train across a number of European countries. The fact that Henry Ifould was prepared to make this, shows that he must have been a somewhat intrepid character.

Henry and Fanny had returned to the London district in which Fanny had grown up.

Living at 89 Burnt Ash Road, Lee, in the St Peter’s parish of the south part of Lewisham, London and Kent were:

William listed his occupation as ‘civil engineer’ working on his ‘own account’. He was therefore perhaps working on a self employed basis.

Their son Alexander H aged 26 years, was with them. He was an engineer, born in ‘Roumania – Jassy’.

William Henry’s son seems to have followed his father into the engineering business, which he perhaps also studied in Iaşi. Father and son may well have been working together.

Winifred born about 1884 was the daughter Nevil Mark Simmonds and his wife Mary Ann. He was the master of the Northumberland Street Workhouse Marylebone in 1901. His wife Mary Ann was the matron.

1927 (16th May) There is a record of a Fanny Ifould who died aged about 80 at 10 Tamworth Road, Hove, Sussex Probate to John Beale retired rate collector. Effects £91 15s 6d. (Her age is correct for William Henry’s widow, but there is no proof as to whether or not this record is William Henry’s wife Fanny, as there were a number of other Ifoulds living in Sussex.)

I did not find any specific records of children born in UK to Alexander and Winifred Ifould, where the mother’s maiden name was Simmonds. Given that probate in 1942 was to relatives from the Simmonds family at Winifred’s death, there may have been no children.

As a child whose mother died when he was an infant and for whom there is no record of him living with his father, William Henry Ifould born 1849 has been an interesting character to research.

Like his father Henry Ifould born 1825, he seems to have had intelligence and the ability to strike out and achieve of his own accord, regardless of the rest of the family.

He may have won a scholarship to Churchers College, a local independent school, or his father may have secured a source of funds for his education. Yet he did not abandon his beginnings in the house of a wood turner and cabinet maker. He learned this skill too and became a journeyman who was a skilled craftsman. William Henry then seems to have left rural Hampshire behind and tried his skills in London, where he met and married his wife Fanny.

There he displayed the adaptability observed in other members of the Ifould family and became even more ambitious. He travelled many miles to live with his wife in Romania where he broadened his construction skills learned as a carpenter, to those of engineering. He was perhaps here using and extending, to the foremost, the good education he had received at Churchers College. With his son Alexander, he may have developed the equivalent of a small business, whose interests lay in the construction industry in Romania. After a number of years abroad and having made money at engineering, he returned to England.

William Henry’s son, however, went back to live in Romania, which perhaps shows that there were still Ifould business interests there and further gains to be made. The effects that were eventually left at his son’s widow’s death, would seem to indicate that this father and son engineering venture had been successful and profitable.

Again, we see demonstrated the Ifould family trait of seizing an opportunity when it arose and working from relatively humble beginnings, to achieve a good measure of success.

There are more articles about members of the Ifould family here:

and there is more about the Cricketers Inn here:

Vicars and Curates of Steep church and parish