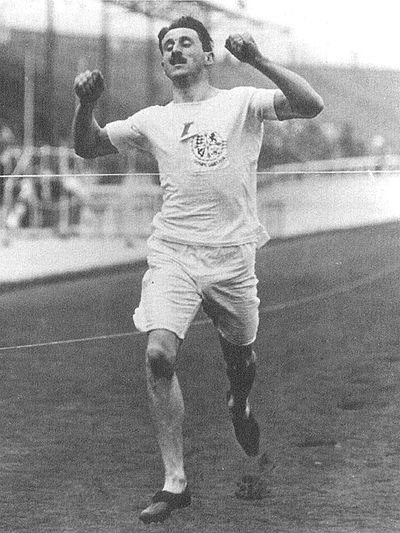 Information here is taken from an article written by Davis Dobson for the July/August 2012 edition of the Steep and Stroud village newsletter.

Wyndham Halswelle was the son of artist Keeley Halswelle. His father lived with his family at Stoner House in Steep from 1880-91.

Wyndham Halswelle excelled at running at school and in the army, where he was commissioned into the Highland Light Infantry and sent to South Africa. On the return of the regiment to the UK in 1902 the young officer was urged to apply himself seriously to running and he made rapid progress, culminating in his selection to run the quarter mile for Britain in 1908, having set a British record for the distance earlier that year, (a record that was to stand for twenty six years).

Track events were held at the old White City stadium in West London, and the 440 yard  heats were fiercely contested. However, in the second round Halswelle set a new Olympic record and when he reached the final he was hot favourite to win.

The three other finalists, Robbins, Carpenter and Taylor, were all American, and the race reflected the intense competition between the British and American track teams. The final was not run in lanes and as a result something of a free-for-all developed, with Halswelle being baulked by Robbins in the first 50 metres. Coming to the 300 metres mark Robbins led from Carpenter by about a yard, with Halswelle well placed to strike off the final bend, as he had done in the earlier rounds. But as Halswelle made his move to pass Carpenter in the straight the American began to run wide, forcing him to within 18 inches of the outside of the track. Halswelle later recalled: “Carpenter’s elbow undoubtedly touched my chest, for as I moved outwards to pass him, he did likewise, keeping his right arm in front of me. In this manner he bored me across quite two-thirds of the track, and entirely stopped my running”.

The interference appeared so obvious to the judges that they broke the tape while the race was still being run and declared the result void. That evening they disqualified Carpenter and ordered the race to be rerun in lanes (or ‘strings’ as they were then known) two days later.

In the event, Robbins and Taylor boycotted the final in protest at Carpenter’s disqualification and Halswelle was thus left with a walkover to the Olympic title. He made known his reluctance to run in such circumstances, but the AAA gave him no option, and he duly ran a solo lap, to the warm reception of the capacity crowd. The controversy, though, continued, and at its annual convention the American Amateur Athletic Union refused to recognize Carpenter’s disqualification, so strongly did its members feel about the verdict of the British judges. The episode soured Halswelle’s own attitude to the sport too and after a farewell appearance at Glasgow Rangers sports later that year he effectively retired from the track. He then returned to his regiment to concentrate on his army career and in WWI was killed by a sniper at Neuve Chapelle in France, on 31 March 1915.

Faces of Steep from the Past