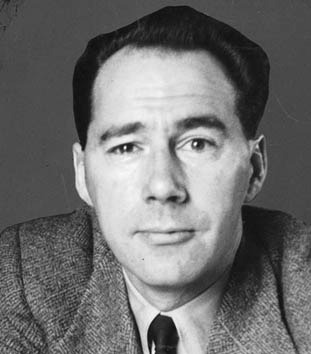 John Wyndham, the author of ‘Day of the Triffids’ and other well known works of science fiction, lived in Steep for the last years of his life at a house named Oakridge.

His full name was John Wyndham Parkes Lucas Beynon Harris. He had been born in Warwickshire and was educated at Bedales School from 1918 to 1921. His younger brother Vivian was also there 1919 to 1924. Harris wrote ‘The Day of the Triffids’ in 1951.

John Harris married Grace Isobel Wilson in 1963. They were both long time members of the Penn Club.

Perhaps due to fond memories of the local area from when he was at school, Harris moved back to Steep after he married and lived here for his later years. It is believed that he died in Steep in 1969 and was cremated at Guildford.

It is said that the tentacles of the Triffids were inspired by the long shoots of brambles that grew out of hedges in the local Steep countryside.

A fuller biography of his life, his service during WWII and information about his written works can be found at  https://www.oxforddnb.com/   It is possible to log into this site with a local library card number.

The FA Cup Final and Steep

Henry Ifould of Steep, the Builder of the Cricketers Inn